From the makers of Puzzlejuice

When we last told you about the gorgeous new iOS puzzle game from Puzzlejuice co-conspirators Asher Vollmer and Greg Wohlwend, we didn't really know what Threes! was about, or when it would surface on the App Store.

It's due to go live next week on February 6th. And we've played it (and managed to shake off our crippling addiction for five minutes) so we can share what we know.

In the game, the idea is to move numbered tiles around a cramped 4x4 grid and then shove them up against the walls to squeeze them into one another to make new - bigger - numbers. 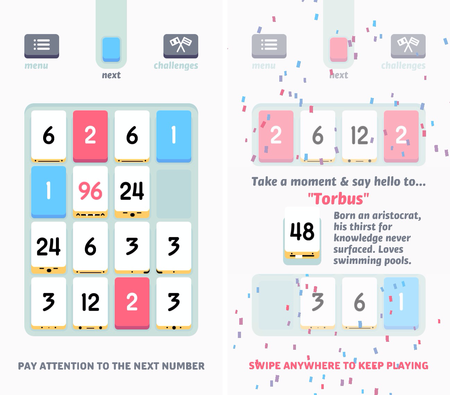 It's super-satisfying to set up a run of perfect combinations or squeeze two massive numbers together to get an enormous number that will boost your score. There are elements of Triple Town and the best match-three puzzlers here.

Each number has a personality, a name, a backstory, and a voice. And some of the voice actors are celebrated indie superstars, like Aquaria's Alec Holowka, Offspring Fling's Kyle Pulver, and Hyper Light Drifter's Teddy Diefenbach.

And while we're throwing names out there, Wohlwend also did the art for Hundreds and Ridiculous Fishing, which is why Threes! is just so darn pretty.

Threes! will be out on iPhone and iPad next week.

Might & Magic: Clash of Heroes is dirt cheap on iOS and Android at the moment