You have my sword, and my axe [Updated: King explains trademark issue]

By Chris Priestman
| Jan 22, 2014
iOS
|
The Banner Saga
Update on January 22nd, at 21:30: King has issued a statement explaining its reason for opposing the game title, The Banner Saga.

"King has not and is not trying to stop Banner Saga from using its name. We do not have any concerns that Banner Saga is trying build on our brand or our content.

However, like any prudent company, we need to take all appropriate steps to protect our IP, both now and in the future. In this case, that means preserving our ability to enforce our rights in cases where other developers may try to use the Saga mark in a way which infringes our IP rights and causes player confusion.

If we had not opposed Banner Saga’s trade mark application, it would be much easier for real copy cats to argue that their use of “Saga” was legitimate.

This is an important issue for King because we already have a series of games where “Saga” is key to the brand which our players associate with a King game; Candy Crush Saga, Bubble Witch Saga, Pet Rescue Saga, Farm Heroes Saga and so on. All of these titles have already faced substantive trademark and copyright issues with clones."

Last night we spoke to Alex Thomas of Stoic Studio about the Viking legend-inspired RPG, The Banner Saga.

Now that The Banner Saga is out on PC, we wondered whether it would ever come to handhelds in the future. It's good news.

"We are definitely bringing the game to tablets, I believe our first port will be iOS, but obviously nothing is set in stone as of yet," Thomas tells us.

But amid this good news there is an ugly underbelly. You should recall that King, the Candy Crush Saga developer, has trademarked "candy" and is trying to remove games with infringing titles.

There were rumours floating around still that King had also descended its hammer upon Stoic Studio and The Banner Saga.

According to a document that was slipped into our hands, that much is true.

Obviously there's no infringement of the trademarked word "candy" in "The Banner Saga". But what this document reveals is that King has a pending trademark on the word "saga", as well.

King also has trademarks held across at least 25 game titles with the word "saga" in them, too.

So King's opposition against The Banner Saga is that it "is confusingly and deceptively similar" to these other game titles with "saga" in them. The argument being that it will damage King's games and its revenues by confusing potential purchasers. 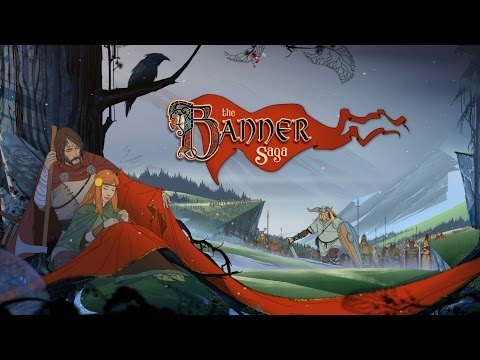 They're saying that we, the players, wouldn't be able to discern between Papa Pear Saga, or Candy Crush Saga, and The Banner Saga. Which is ridiculous because the games are entirely different. But that's beyond the point.

Further, the claim is that Stoic Studio also clearly intended to do this by titling its game The Banner Saga. This accusation perceives the title as an attempt to ride on King's wave of success, apparently. That's what the trademark claim is really all about.

King's intention with the trademark claim, then, is to have The Banner Saga removed from sale or re-titled based on the proposed infringement of the word "saga" in the title.

But as Stoic tweeted last night, it has good reason for naming the game that.

"Dictionary defines Saga: A medieval Icelandic or Norse prose narrative of achievements and events in the history of a personage, family, etc," Stoic's tweet reads.

In other words, "saga" is more an identifier of what The Banner Saga is, and what it's about, than a way of branding the game.

That may not matter, though. King is a huge company and Stoic are only small, and therefore probably can't stand up to a legal case to defend itself against King if necessary.

If King has obtained trademarks over common words to protect its intellectual property, then it must defend itself. This is usually to battle against clones or games with deliberately similar titles.

In this case, it seems like over-cautious behaviour, even if necessary to uphold registered trademarks.

Hopefully the trademark claims won't mount to anything and The Banner Saga will be on our tablets, safe and sound.

Want more? Check out our growing collection of The Banner Saga news stories!