Your task is to head down to Depth 16 of the magma-filled underworld, grab the Golden Fleece, and use the portal to zap back home to rule as king.

In the way of that path to glory is a hostile bunch of demons residing on each Depth. You may be a legendary Greek soldier, but taking the wrong step at an unfortunate moment will result in your getting attacked from all sides. Death follows shortly after.

Hoplite is a game that requires keen analysis and experience, then. If you're just getting started in it, then we have some excellent tips to help you on your way towards that Golden Fleece, and beyond...

1. Pay attention to the demon archers and wizards

The demon archers and wizards are the most dangerous enemies in the game. I can't emphasise that enough.

Your spear and shield give you the advantage when in range. First, however, you need to get close... and that can be tricky.

Both the archers and the wizards can fire in six directions and reach you from five tiles away. The archers can't attack you if you're stood in a tile next to them, though. The wizards can, however.

Also, and this is very handy, the wizards cannot fire their spell two turns in a row. If they fire at you once, you can move in their attack range for the next move and they won't be able to hurt you. After that, you'll need to steer clear again.

Perhaps the most important thing to do is to make sure you scout out all of the archers and wizards before moving. Once you've found them, tap on them to bring up their attack ranges. All of them. 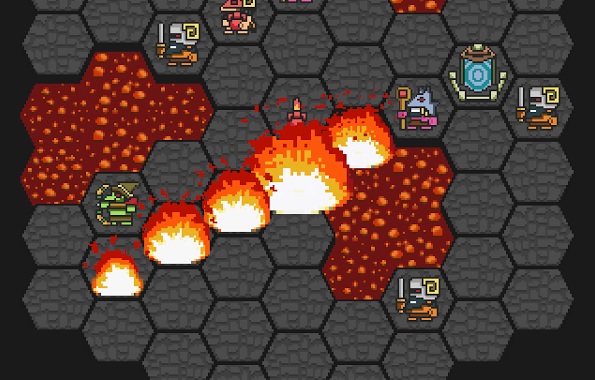 Now, you need to take note of the places to where you can move and be unharmed. Although this process is laborious, you need to perform it before every turn, otherwise you risk taking unnecessary damage. That all adds up.

That said, you'll sometimes be in a position where you can't move to an adjacent tile without taking damage. But don't forget your sandals! It's very rare that you can't use your sandals to leap to a safe tile. Unless, of course, you've already used your energy.

Which leads us on to the next tip...

2. Don't forget your sandals when you need them

Yes, the sandals are vital to your survival. If you didn't already know, the sandals enable you to jump across two tiles. You can use this fact to escape damage and get behind enemies.

When I first started playing Hoplite, I rarely used my sandals. As a result, I was taking quite a bit of damage. While the sandals aren't much use in the first few Depths, they're vital in the harder levels.

Quite often, you'll end up surrounded on all sides by a complete mix of demons. Quite often, there will be a gap just behind them, so leap there.

By making those kinds of leaps, you'll get the added benefit of taking the enemy out that was blocking your way. The great thing about the sandals is that they recharge every time you go to a new Depth, too. So, you don't have to worry about saving them for later.

You'll also need to remember your sandals if you find yourself backed up against magma and can leap across to the other side of it. Or if a bomb lands right next to you and the only way to avoid it might be to leap.

The overriding point is this: don't forget about your sandals.

3. Maximise your health early on

I'd imagine that it's instinctual for most of you to want to maximise your health as soon as you can in Hoplite.

You do this by visiting the altar in any of the first 16 Depths (they're replaced by the endgame portal after 16) and tapping on them. It's best to do this once you've eliminated the enemies in that Depth.

Providing you're doing your best to avoid taking damage, you shouldn't need to restore your health in the early stages. So, increase your maximum health - once per Depth - until you can no more.

This tip is only really aimed at those of you who are trying to reach the Golden Fleece. If, by contrast, you're trying to go for a more challenging run, you may want to invest your prayer in something else.

It's true! Sometimes, attacking an enemy without thinking ahead can leave you in a bad spot. Once again, this is just a case of being very wary before committing to a turn.

The problem is that when you see a way to attack and remove an annoying enemy, you forget to make checks.

If you're about to take out an enemy right next to you, just make sure you tap on the other enemies to see if that puts you in the path of their attack. If it doesn't, go ahead.

You'll also want to be wary when attacking demons that are lined up one behind the other. If you take out the demon in front and the one behind it is a wizard, that wizard will attack you afterwards. 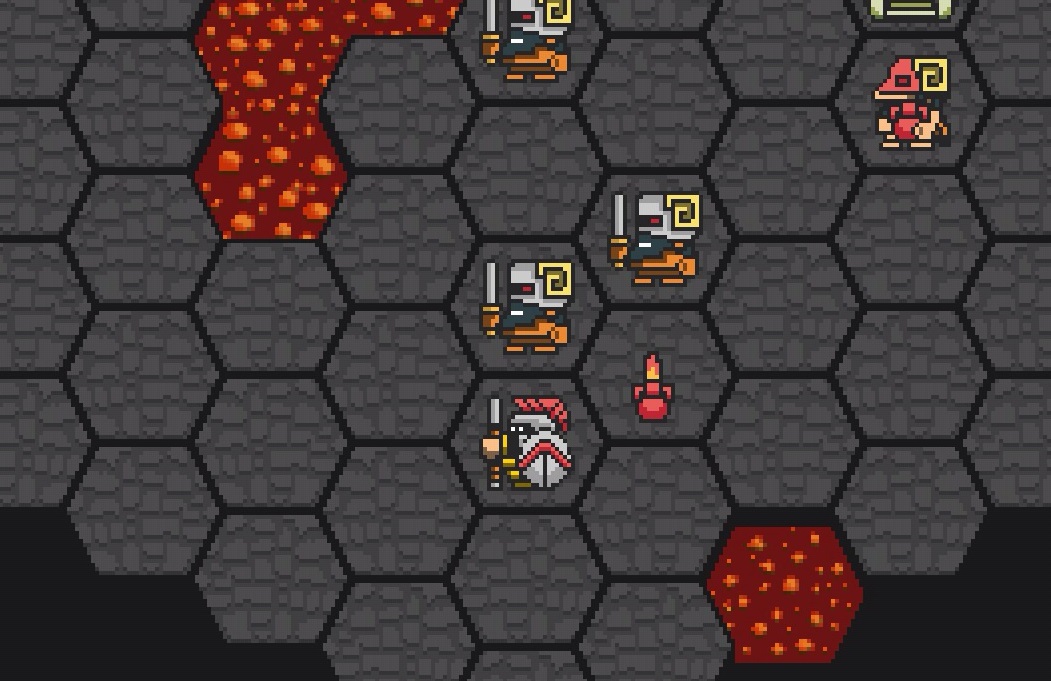 I've been in a situation where I've avoided taking out a single enemy because it would cause me damage. In the following two turns, though, I had the opportunity to take out three enemies in one move and avoid damage completely. And it included the enemy I could have killed before.

A rule of thumb: if you can see a move will result in your taking damage, avoid it. From my experience, a better opportunity will present itself a few moves later.

This might seem like an oddly specific tip, but there's a very good reason for it being listed here. Trust me.

As you should know by now, you play Hoplite on a grid made up of hexagonal tiles. You can lunge at an enemy who is two tiles away, but ONLY if it is in line with one of the faces of the tile in which you're stood.

If that enemy is in line with one of the corners of the tile in which you stand, then you cannot lunge at it from your current position.

This means that if you move towards the enemy and discover it's a footman (or a wizard), then it will have the chance to attack you next turn.

For this reason, it's important to check you will attack an enemy before moving to a tile that's adjacent to one. You can do this by holding your finger on the tile to which you want to move. If the enemy's tile turns red when doing this, then you'll attack it. If not, then it'll attack you if you move to that tile.

With that in mind... if you're in a situation where you want to take a footman out and it's two tiles away from one of your corners, back away if you can.

By backing away, you force the footman to move towards you. Hopefully, it'll go into a tile to where you can move next turn and attack it.

One of the easiest Achievements you can earn in Hoplite results in your getting access to a very handy ability. It's the first Achievement listed, called "Optimal Restoration". To obtain this, you have to pray to restore your health with only one heart and no energy for your sandal.

You can earn this on the first level. Just take two damage so you have just one heart remaining, then kill the two enemies. After that, use your sandals to leap until you've run out of energy, and then pray to restore your health. Now, you've unlocked Shielding Bash II.

When you now pray at an altar on Depth 5 or lower (higher number), you'll probably have the option to sacrifice two hearts for Shielding Bash II. 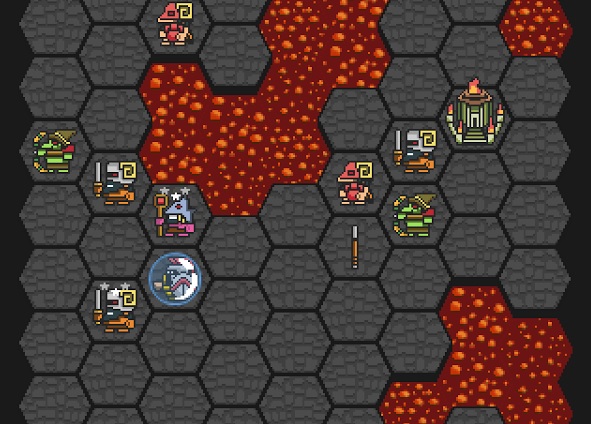 Grab it, though it's probably best to make sure that you pray at the altars before this and choose to increase your health so you don't miss those two hearts.

You're best off using Shielding Bash II in later levels when taking damage is something you have to accept when surrounded. If you can anticipate the times you're about to take damage, shield bash an enemy or bomb. You'll then be invincible for the enemy's next turn. It makes all the difference sometimes.

You can acquire Deep Lunge quite early on if you get lucky and it appears at one of the altars. I've bagged it at the very first altar before.

Deep Lunge doesn't require any health sacrifices. With it up your sleeve, you can attack two enemies at once (so long as they are lined up one behind the other... and in front of you).

I've found it to be one of the best ways to reach the fleece, for you can clear a Depth filled with enemies in just a couple of moves with a Deep Lunge. It's especially handy in later levels when you're almost drowning in demons.

With Deep Lunge equipped, you can also take down three enemies with one move, granting you a fairly easy way to get the Multikill achievement.

8. Hide behind other enemies

As mentioned previously, the biggest threats to you are usually the archers and wizards. They'll attack you from distances, and you have to get right next to them to take them down.

But did you know that the archers and wizards won't attack you if there's another demon in between you both?

This is very important. If you're not aware of this, then you may not see a safe tile to move to when there is one, and you may end up taking some damage when you shouldn't have to.

If you have the Deep Lunge ability, you can keep a footman or demolitionist in front of a wizard or archer, and then get close to take them both out in one lunge.

This is another tip that will come in handy in later Depths. In earlier Depths, you see, there aren't usually enough demons to hide behind. Later on, though, you'll be 'spoilt' for choice.

9. Avoid throwing your spear unless you upgrade it

One of the abilities you have in Hoplite is to throw your spear at enemies. You can increase the reach of this throw in exchange for praying at some altars.

I may be wrong here, but there don't seem to be many advantages to throwing your spear.

Of course, there are those occasion when you can throw your spear to kill an archer or wizard that's about to attack you. But the trade-off is having to retrieve your spear and being harmless until you do so.

Most of the time, I find that evasion and waiting for an opportunity to get close to an enemy works much better than risking a spear throw.

There are exceptions to this rule, however, but these don't emerge until you've got a certain distance into the game.

I'm talking about reaching Depth 10 and unlocking Recall, which is a prayer that you can grab at an altar. It just means the spear is returned to you rather than your having to get it.

Once you've returned the fleece, you also unlock Plant Spear. This is another prayer through which you can stun adjacent demons when you throw a spear.

These two prayers make spear throwing a little more worthwhile, but that still means choosing these over other abilities that are probably better.

In any case, you shouldn't throw a spear very often unless you're trying to show off.

Want more? Check out our growing collection of Hoplite articles!