I'd best describe Oquonie as the 'dark' version of Monument Valley. Both games are isometric puzzlers for iOS with a heavy emphasis on impossible spaces.

Oquonie is the result of a collaboration between Devine Lu Linvega (the developer of the Gold Award-winning Hiversaires) and illustrator Rekka Bellum.

Together, they've created a mysterious world of elusive symbols, strange animal characters, and an obscure language.

Your task in Oquonie is to guide various characters through the game's non-Euclidean structure. You will be able to play as a rabbit, a pig, a long-necked creature, and more.

You will encounter other characters along the way, too, particularly a bird-like chap who offers you help. The only problem is that these characters speak in a language called Camilare that was created specifically for Oquonie. 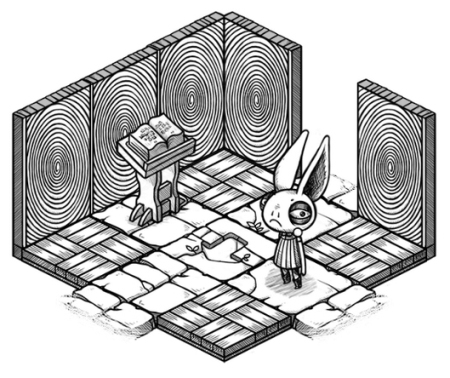 In early screenshots of the game, you can see that the characters communicate in this language through complex symbols. It looks as though you'll find these symbols in the environments.

Have a look at the highly detailed walls and floors in the gallery of Oquonie screenshots up there on the right of the page to see what I mean.

Oquonie is still deep in development, but should surface on iOS in early 2014. Once we know more about it, we'll be sure to share it with you. And you.

The Ember Conflict is an upcoming multiplayer RTS for iPad full of short, sharp tactical scraps