The Ember Conflict is an upcoming multiplayer RTS for iPad full of short, sharp tactical scraps

The Ember Conflict is an upcoming multiplayer RTS in which you will face off against a foe in 2-minute scraps optimised for touchscreens.

It's the brainchild of first-time Chinese indie dev Substantial Games, and is set to land on the iPad later in the year.

There are 1v1 and 2v2 battles in The Ember Conflict. In all of these battles, the focus is on timing and positioning.

You control your customisable army by drawing lines on the screen, enabling you to execute quick-fire flanking moves with the minimum of fuss. 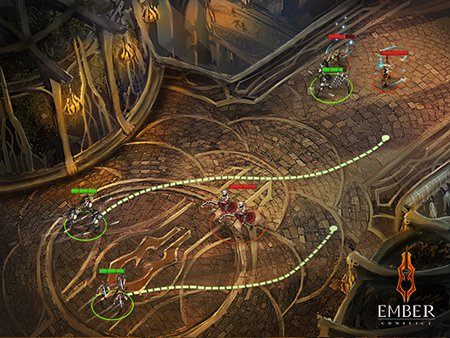 "If you think about games like Starcraft, executing a basic flank takes several clicks and keystrokes. Most players can't do it well," Substantial CEO and founder Pin Yang says.

"On the touchscreen, you simply draw a line. So, that makes it super-easy. Our game revolves around these tactics.

"On top of that, we add Warhammer-inspired army customisation, 2v2 team modes, objectives, abilities, and maps with terrain."

According to Yang, his studio has also drawn inspiration from Autumn Dynasty, a game in which touchscreen controls are used to great effect.

The Ember Conflict should surface on the App Store in the autumn. We'll keep you posted as and when we hear more about it.