This is the third iOS 7 controller that we've reviewed, but the Logitech PowerShell is the first one that actually comes close to feeling like an Apple product.

At a first glance, it has the sort of lofty production values that means you'll actually allow it to get within 50 metres of your diamond-cut, anodised aluminum and ceramic glass iPhone.

The controller has a matt finish on the front, a subtle rubberised grip around back, and a glossy strip around the sides. It has a nice weight to it and leaves gaps for important iOS functions like the volume buttons and the camera.

Plus, your iPhone slides comfortably into the frame, and at 20cm wide the slim PowerShell makes playing on the bulky 24cm long MOGA Ace Power look like trying to pull a Christmas cracker with yourself.

But look closely, or just use it for a few days, and you'll find the sort of dunder-headed design pitfalls that would have an Apple employee personally killed by Jony Ive.

If you want to use headphones, you'll need a clumsy plastic adapter (which you will definitely lose) to reach the jack on your iPhone. The MOGA pad didn't need this - it just routed audio through the lightning port and provided its own headphone port. 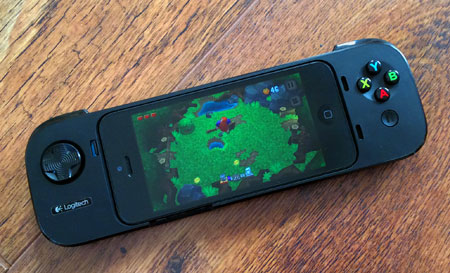 It doesn't have an LED light to indicate when it's on and how much battery it's using. Instead, the Logitech logo lights up red when it's close to death and needs a charge.

That would be just about workable if the logo wasn't on the back of the controller - you'll need to play this thing in front of a mirror to know when it's about to die.

Plus, you have to push against the camera to get your phone out (the last place you want to be applying pressure and big finger prints), the switch to turn off your iPhone is horrible, and the adapter for the iPod touch is a gross plastic sheet that doesn't fit in snugly and will be lost within four minutes of you owning it.

But more important than all this is that buttons themselves just aren't up to scratch.

Logitech went for the standard controller setup, which means it has no analogue sticks and just one pair of shoulder buttons. It's left with four buttons, two triggers, and a D-pad.

The D-pad needed to be terrific to justify the fact that this thing is ignoring ten years of controller evolution by ditching the analogue stick. But it's not - it's a squishy little rocker that doesn't feel particularly nice under your thumb. 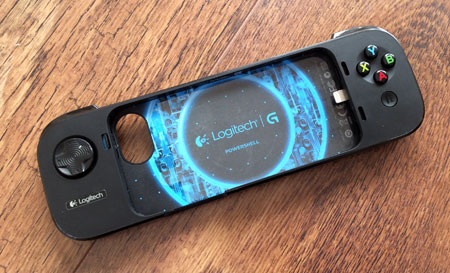 It often reads two directions at once, making you jump or duck when you mean to run, and it only registers a hard push, which is not only uncomfortable for long periods of time but you'll notice characters stopping dead in their tracks simply because your thumb made a slight adjustment of pressure on the pad.

The buttons and shoulder buttons are better, but far from perfect, and like the MOGA - but unlike the SteelSeries Stratus - they require a firm push to register and lighter presses go unnoticed. You can make the button click but Limbo man won't jump and king Trouserheart won't swing his sword.

It's not a game-breaker but, as we've said before, we're spending £90 / $100 on physical controllers to escape the tyranny of unresponsive controls and missed button-presses - not perpetuate it.

The lack of buttons and sticks also limits the compatibility of the PowerShell. You can't shoot in Dead Trigger 2, for example, and while you can play San Andreas you'll still need to reach over to the touchscreen to adjust the camera or change weapons.

The fact that this costs the same amount of money as a pad with full compatibility makes it especially hard to recommend.

Finally, there's the battery. It's got a 1500 mAh cell, making it less juicy than the MOGA's 1800 battery, but you should get at least ten hours of play from it. You can also use it to charge your phone, and save an hour or so of battery life that would normally be eaten up by the game.

The Logitech PowerShell is a dud. Not only is it desperately ill equipped for today's dual-analogue games, but it's got unresponsive buttons, a bad D-pad, and suffers from the sort of knucklehead design decisions that don't belong on a premium priced product.

The Logitech PowerShell is compatible with the iPhone 5 and 5S, and the fifth-generation iPod touch.

The Logitech PowerShell looks and feels nice, but skin-deep beauty counts for little when it has unresponsive buttons, a bad D-pad, silly design flaws, and limited compatibility
By Mark Brown
| Jan 13, 2014 |
iOS