Hands-on with Lara Croft: Reflections - a tomb-raiding card-battler for iPad and iPhone

From the Live Journal of L. Croft

Hello, my name is Lara Croft and I am a sexy lady adventurist.

You can tell I'm sexy and a lady because I stick my impossibly large breasts out everywhere I go, swooshing them around whenever I fire my many phallic weapons.

Except don't call me Lara, because I accidentally opened a door and some plot happened and now there are lots of Laras and we're all trying to kill each other instead of talking things out.

I had to think of a code name. My code name is Margaret. 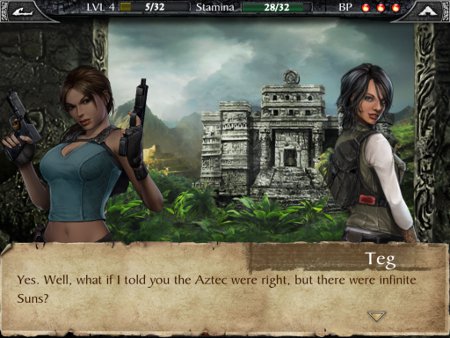 A young woman named Teg is helping me to try and find the shiny artefacts I need to lock the door and put everything back the way it was.

She's always looking over her shoulder like a glamour model. It's a bit odd. She tells me things about my inventory that are basically gibberish.

I don't think Teg is even a real name.

Oh bother, another Lara has turned up and now I have to shoot and stab her to death because that's what this game is basically about. I don't really do anything, though, because Lara Croft: Reflections is a card-battler. 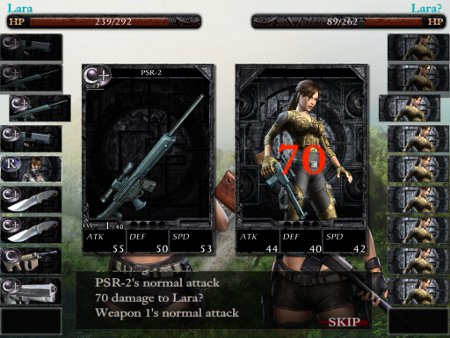 The digital cards I've collected flash and duel while I stand there, thrusting out my enormous breasts as though they might catch fire at any second and burn my chin.

I'm pretty sure that's how women stand, although my back feels like it might snap at any second.

Pew pew pew, take that other me. Have some handguns in your face, take a knife to the pistol, shove that assault rifle past your armour to somewhere uncomfortable. Look at all the numbers!

All of these fights feel thematically awkward, and apparently I have an infinite backpack full of guns and special jumpers that I only wear once.

When I'm not fighting I'm usually running forwards while wearing short shorts - not the armour I've collected - in the direction of a temple I never seem to reach because of perspective. 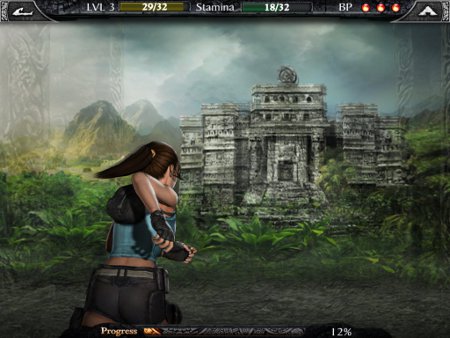 Sometimes there are treasure chests in my way, so I open them and steal the stuff that's inside without sparing a thought for the people who might own them. Usually the things inside are cards with pictures of me on them anyway. Dibs.

Sometimes I have to tap on traps or slash up a hairy bear monkey thing with my knife. It's nice to have things to keep me busy when I stop running, because otherwise I'd have no control over the game whatsoever.

There are lots of stamina bars, currencies, battle points, timers, levels, and other things for me to pay attention to. I liked it when I rolled around in tombs shooting dinosaurs.

I think maybe Teg is hiding something from me, because she refuses to turn around and face me. Perhaps she is jealous of my thrusting chest, exposed navel, and shorts so short they're practically a leather wedgie. 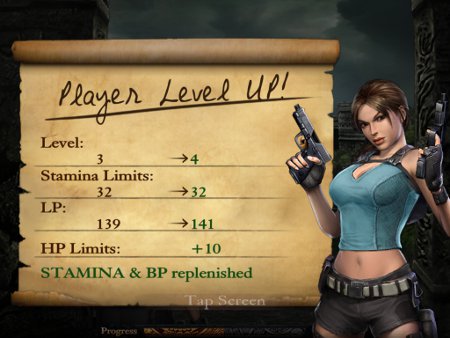 When I'm not running, murdering versions of myself, or attacking animals, I'm in a confusing series of menus. I can change the order of my cards, buy stuff, take part in events, and generally have a whale of a time via the medium of taps.

Right now I'm out in New Zealand, but soon enough I'll be winging my way to an App Store near you.

Hands-on with Wave Wave for iOS