Grungy platform classic VVVVVV is definitely heading to iOS, Android, and Ouya in 2014 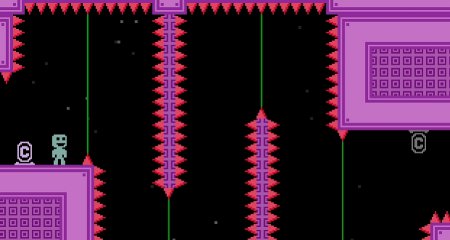 It's been in the pipeline for a while, but it looks like iOS, Android, and Ouya gamers are finally going to be able to sample Terry Cavanagh's epic retro platforming classic VVVVVV in all of its scratchy glory later this year.

In a new year update blog post, Cavanagh revealed he's had an incomplete version of the game working on iOS for over a year now, but a variety of other projects have prevented him from finishing it off.

That's all going to change this year, though.

There's a PS Vita port of the 3DS version on its way, too. That will be handled by Nicalis.

I am VVVVVV happy

According to Cavanagh, he's going to try and get all of the versions out at the same time. It'll be the last thing he ever does with VVVVVV, a game he describes as his "Final Fantasy", and he wants to make sure it goes out with a bang.

We'll let you know when we hear something more concrete about a release date for VVVVVV on Android, iOS, Ouya, and Vita.

Want more? Check out our 12 other VVVVVV news stories!

Tough platformer VVVVVV will be bouncing onto iOS, Android, and Ouya this Thursday