Pretentious Game for iOS and Android is an intriguing blend of puzzling, platforming, and wit

Pretentious Game isn't a pretentious game. Well, it sort of is.

It's pretending to be one (by being one), you see, and it's quite good at it.

It's a cheeky parody with a warm heart and some clever gameplay tricks that change the nature of its tiny levels.

It's a platforming-puzzler wrapped up in a narrative about love, loss, and sacrifice. In each level, the dev reveals a snippet of the story, and the words change the way the game plays.

The solutions to seemingly impossible situations are wrapped up in the handful of words in each of the challenges. It all makes for some pleasing variations and a lot of outright rule breaking that'll keep you on your toes. 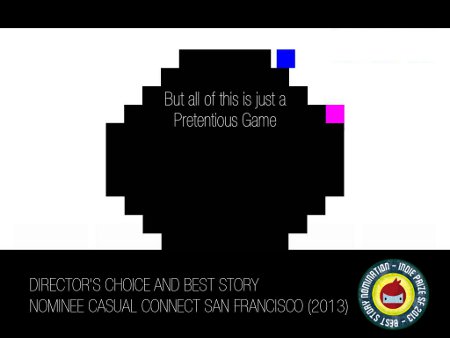 With a simple blocky style and a chunk of free levels to get you in the mood for what follows, Pretentious Game is a lot more interesting than its Scary Movie title might suggest.

The game is available on the App Store right now. It won't cost you anything to play the first chapter and get an idea of what the game is all about.

It's worth it, too, because Pretentious Game is one of those rare games on the App Store or Google Play Store full of originality.

Plus, it's really windy outside, so what else are you going to do?