Almost two years ago, Sony introduced us to the PS Vita. It was a groundbreaking piece of kit that allowed us to play the sorts of games we used to play in the living room, but now at any time, and anywhere.

With the Vita TV - Sony's new micro console that's currently exclusive to Asia - those games are now returning to the living room.

So is it time to ditch the Vita's puny screen and thumbsticks for a huge telly and a controller more fitting for human hands? Let's take a look.

The Vita TV itself is a small, white, plastic box, roughly the size of a porky iPhone. The front is flat and glossy, with a tiny white power LED to the right. The top has a more matt finish, and a big shiny PS logo in the centre.

It looks and feels like the same high qulity plastic used on the non-touchy parts of the regular Vita. 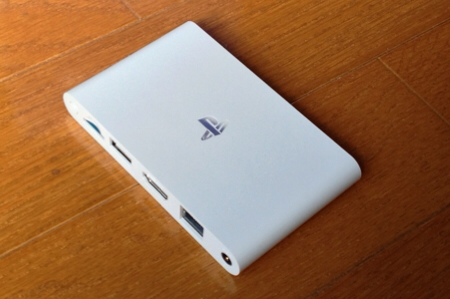 The sides are smoothly rounded and the right houses a Vita game card slot - protected by a familiar, dangly cover. The back is where the real action is, as here you can find all of the ports for getting hooked up. There's a connector for the external power pack, LAN, HDMI, and USB ports, and a Vita memory card slot.

The 'power' button is hidden on the back, so try there before spending five minutes bashing your controller.

It's hard to tell where Sony envisaged the Vita TV would be kept. Its diminutive size makes it perfect for tucking away (keeping all those cables out of sight). But it is quite a dashing little gizmo, and there are some compelling reasons to keep it out on display.

The fiddly Vita card slot and its odd location make it tricky to insert or remove games without plenty of space, for example. And the 'power' button is awkward - but thankfully, since you can put the Vita TV into standby rather than powering off, you'll only ever need to push it once. 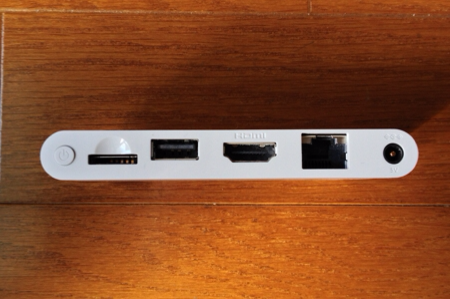 The colourful, bubbly home screen on Vita TV is taken straight from its portable cousin. Stretched to fit the TV, everything is big, clear, and easy to read. But it feels a little less sharp and lacks the pop of the Vita's beautiful OLED display. The app bubbles, previously finger-sized targets, now look like big floating balloons.

Open games and apps are arranged off to the right, as a horizontal stack of LiveArea screens. Here, too, is a new addition - a permanent LiveArea screen called 'Topics' which is little more than a place for Sony to shill its wares.

Navigating with a PS3 controller is exactly the same as using the controls on the Vita - the buttons are the same, and it still feels a little clunky compared to touch control. The PS4 controller is also compatible, and its touch panel would surely be an improvement. 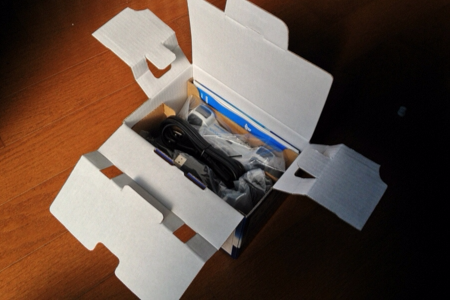 We tried a couple of the games that made the list of compatible software.

First up is the Japanese version of Ultimate Marvel vs Capcom 3. The game scales up to fill the screen without any borders or stretching. Some jaggyness on text and characters is more prominent on the big screen, but the overall look and feel of the game is unchanged.

Touch gestures can be emulated in games by pushing L3 or R3 for either the front or rear touch input. Hand icons appear on screen and they can be controlled with the left or right sticks and triggered with L2 or R2. Once you get the hang of it, this works surprisingly well - but not nearly well enough for a fast paced beat-'em-up. 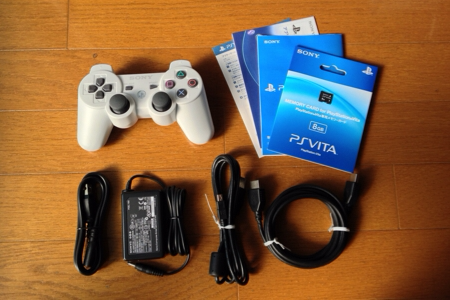 Our US edition of Persona 4 Golden works fine, too. Just like before, the in-game graphics look spot on. The cut-scenes and text boxes are somehow even better - perfectly crisp and sharp as if they were designed for the bigger screen.

The Vita TV does exactly what it says on the tin, then. You can play compatible games on your big screen, using the included pearly white DualShock 3, and the games look great. For roughly £100, you get a pretty cool microconsole with a library of top games.

But if you're feeling tempted, it's best to wait for a Western release. While the Vita TV can be configured to show its text in English, it currently only works with a Japanese PSN account, which makes it extremely hard to download games from the Store.

We'll let you know if Sony ever brings this thing to the rest of the world.

PlayStation TV is now available in Europe, lets you play Vita games on the big screen

Gamescom '14: PlayStation TV is coming to Europe and the US in 2014, with three freebies