Oceanhorn walkthrough - Chapter 4: The Cavern of Fire and Palace of Ice

Found yourself stuck in iOS adventure game Oceanhorn: Monster of Uncharted Seas? In this complete Pocket Gamer guide, we will tell you everything you need to know to save the land of Pirta from disaster.

When we last left you, we had done everything we needed to do to reach the Cavern of Fire, including taking a pot of honey to the Gillfolk and getting the ice spell. Now, we go into two nearby dungeons and retrieve the next emblem.

In this guide, we will mostly focus on the main adventure, so you won't find out about heart pieces, bloodstones, or other side-quests here. We hope to cover that stuff in future guides. 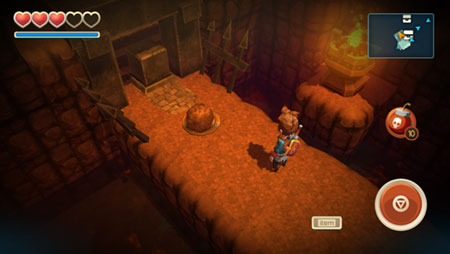 First things first, lift this boulder to release a pressure plate and open the gate into the next room. 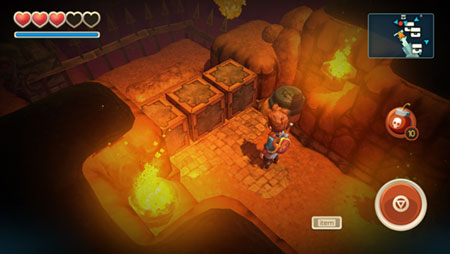 Push the left and right boxes forward, and then push the middle box either right or left to make a gap. Run on through. 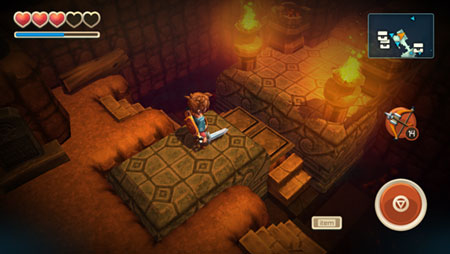 Run past the fire-breathing heads when they stop spouting flames. You can use your new ice spell to unmask the annoying floating enemy, after which you'll be able to hit it with an arrow.

Eventually, you'll come to the room above. Fire arrows at one of the unlit torches but so that your arrow goes through a lit torch. Your arrow will carry the fire and light the giant candle behind. When both are lit, a bridge will appear. Cross it. 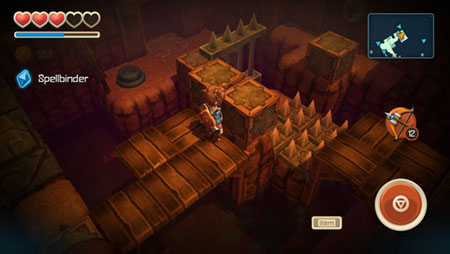 Push the first block you see into the spike pit so you can cross over. Push both of these blocks forward and into the spikes. If you mess up, don't worry: we can reset them in a bit. Now, retrace your steps and go back to the previous room. 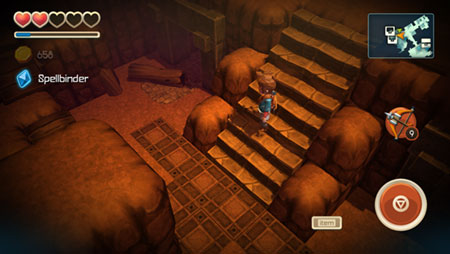 Head down the stairs and go in the door on the left, as shown in the screenshot above. There's a chest filled with bombs. You can use those explosives to blow a hole in the back wall of this room. Follow the path round. 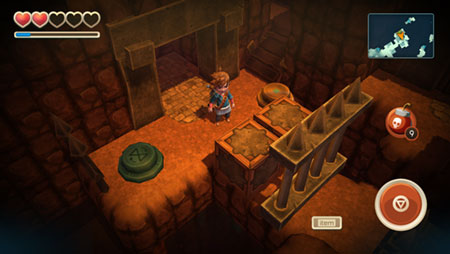 You'll come out here. Hit the reset switch if you messed up the box-pushing section a little earlier (and then run back around and do it again).

Stand on the pressure plate to open the gate and then push the right block all the way forward to the wooden board at the end of the spike pit. 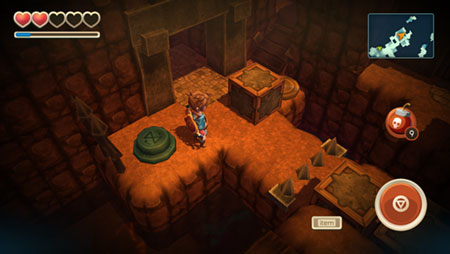 Push the other block back towards the door. Now, push it right one space - but be very careful not to stand on the 'reset' button by accident. Now, push it up against the block you moved a second ago. 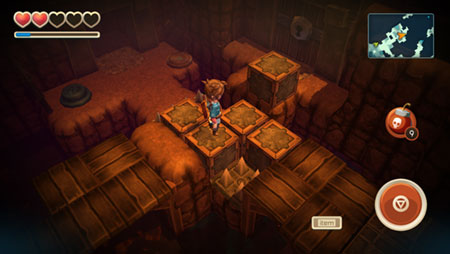 Run up and around the wooden ramp near the door and you'll come to your newly pushed blocks. If you did it right, it will look like the picture above, and you'll be able to walk freely to the corridor on the right. 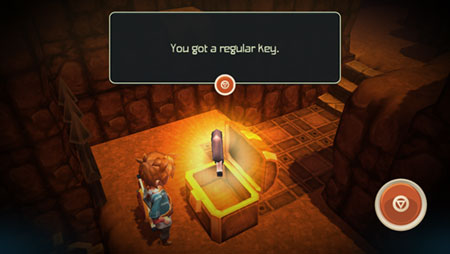 At the end of the corridor is a chest. Inside, you'll find a key. Now, go back to the previous room, shunt the box out of the way, and use your key to unlock the big door. 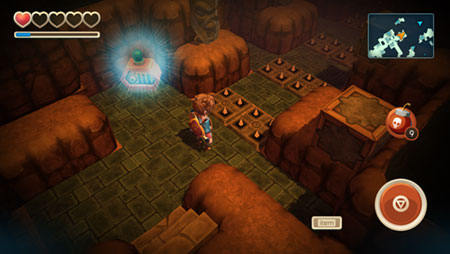 Wait for the spikes to retract and then run over them. They're quick, so only try one row of spikes at a time. Get to the end of the room and waltz on through the door. 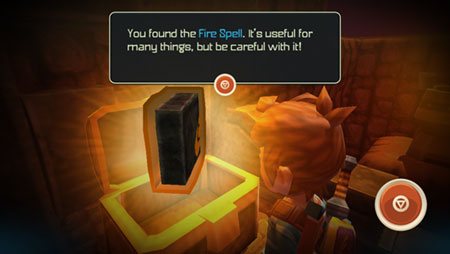 Open the chest in this room to unlock the fire spell. Handy! This one works just like the ice spell, but now it sets things on fire and melts ice. Now, we can leave the cavern of fire. Go back to the exit and go all the way back to the Gillfolk kingdom. 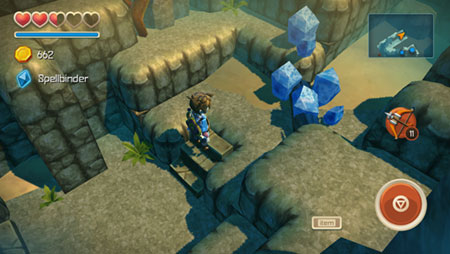 Go to the very back of the kingdom and you'll find an area that's cut off by ice. Use your new fire spell to melt the mini-glaciers, then move the log out of the way.

Follow the path around to this room. We've embedded a video above to show you the solution to this tricky box-moving puzzle. Run on through the gate and follow the path. 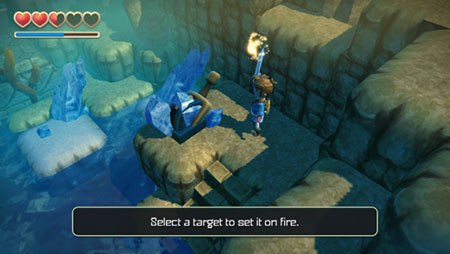 You'll come to this frozen switch. Set it on fire with a spell and then hit it. It will open the door to the next dungeon: the ice palace. Head on inside. 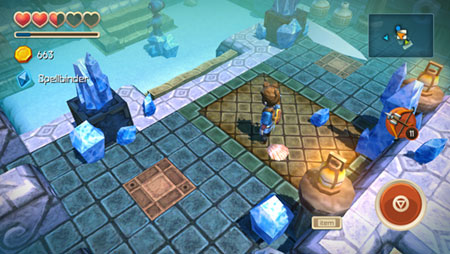 Set fire to both of these blocks to melt the ice and then push them onto the coloured squares on the floor. A chest will drop, containing a key. Use it to unlock the door on the right. 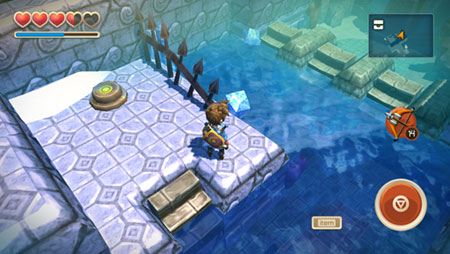 Follow the path - past the ice-breathing statues and over the spikes - to get to this lake. Swim to the right and press this button. The water level will drop - momentarily - giving you a chance to push the underwater block onto the 'underwater' button.

You might need to drop the water twice to push the block all the way. When the block is on the button, a gate will open. Walk on in. 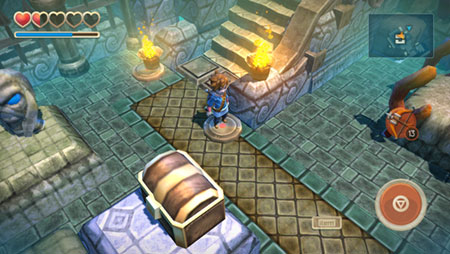 At the end of the room, you'll find two switches. Use the flaming bowls to hold them both down - this will enable you to pass into the next room. 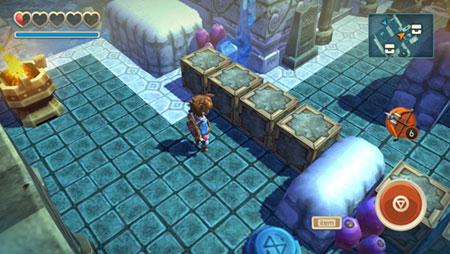 This room has a bridge that is all locked up, so we need to find a handful of keys. First, light the unlit torches on the left and right sides of the bridge. It will be helpful later. Promise.

Go right. Push the second and fourth blocks forward, and then push the third block left or right to make a path. Go in, hit the switch, and walk through the gate. 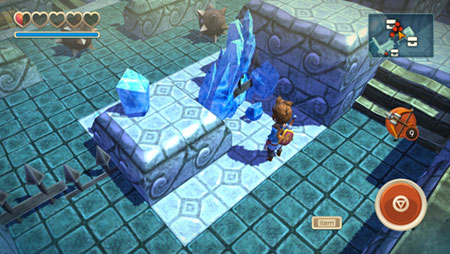 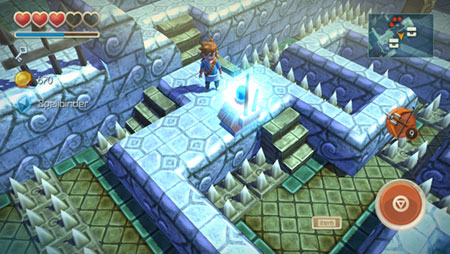 This bit can suck. You need to walk along the top edge of this maze, being careful not to drop down into the spikes below. Go right to get a key (if you go left, you'll get some explorer crystals - useful, but not essential). 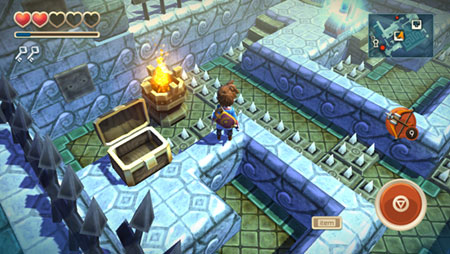 Use your flame power to light this torch, too. With the other two torches on this floor lit, a chest will appear in the main room with the bridge - by a gravestone. Open it to get yet another key. 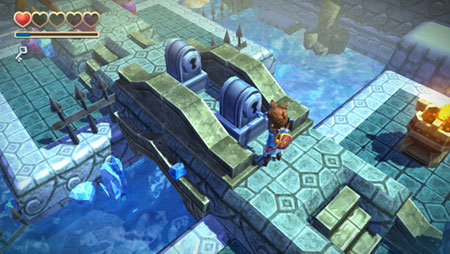 Use your three keys to open the bridge. Walk across it, opening locks as you go, and then drop down into the hole at the end. 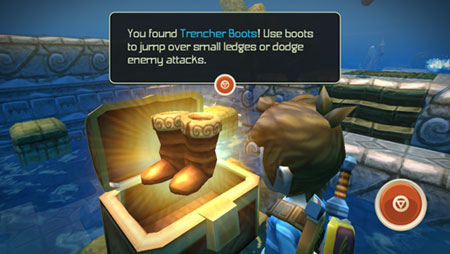 Crack open the chest to find the Trencher Boots. These let you jump between nearby platforms. That will come in handy, I'm sure. For now, use your new boots to jump from platform to platform until you get to a gate. Walk on through. 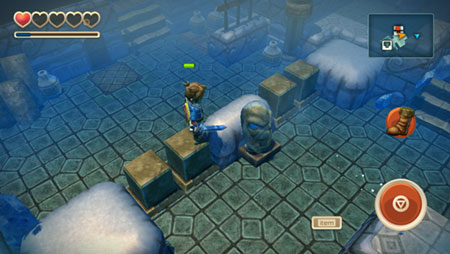 In this room, you'll find a sign that reads: "to reveal a treasure chest, you must stand in the coldest spot of the dragon's breath."

Hit the switch near that sign so that the blocks are lowered and you can move to the upper location. 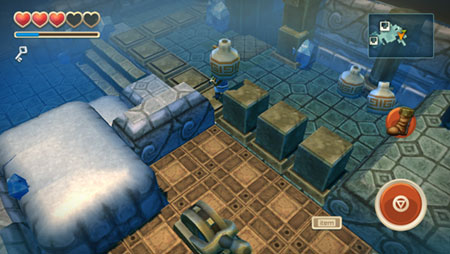 Grab a pot, stand on the lowered blocks, and throw your pot at the switch to be raised into the air. Walk left, drop down, and stand in the place where the icy blast reaches. A treasure chest will appear.

Make your way there (using pots to lower the blocks as needed) and take the key from the chest. Go through the door on the right and use the key to unlock the big door. 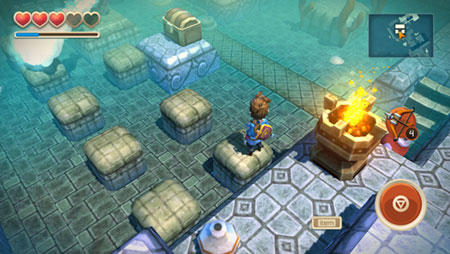 Make your way back to this room. You remember this room - it's the one with the two buttons. Now you can get up to this platform and use your new magic jumping boots to get to and open the treasure chest. 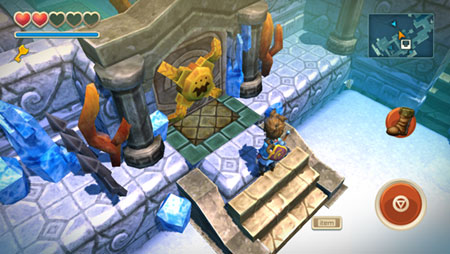 Inside is a master key. Take it back to the central room and open the door with the giant gold lock. Walk on inside.

You get to choose when to start the boss fight, so make sure you stock up on health before beginning the battle. When you're ready, use your fire spell to melt the ice around the princess. The battle will then begin.

Turn around and use the fire spell to melt the ice on the button in the middle of the room. This will make the blocks near the statue heads in the four corners of the room retract.

Quickly go to one of them and stand on the block. When it rises up, stand on the button to make the statue spew fire. If the boss is caught in the fire, he will fall to the ground with an exposed weak point.

Slash it with all your might to weaken him. Do this three or four times to defeat the Dead King Angler.

If he encases the main button in ice, melt it with your fire spell. If he does it to the other buttons, just use one of the other three instead. 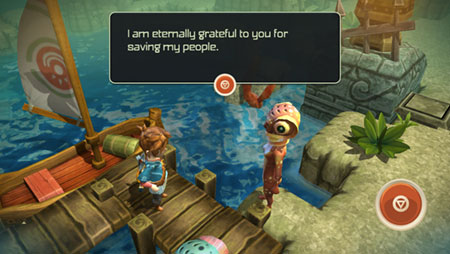 With the boss dead and two emblems under your belt, get in your boat and head to Riptide Reef. Until next time, adventurer.

Want more? Check out our growing collection of Oceanhorn tips, guides and walkthroughs!

Kickstart this: Pick out your target and wait for the perfect moment to take your shot in Lonewolf