If you're a member of the LGBT community, you've probably had a hard time finding a gay character to use in modern arcade fighters.

With an active imagination, there was always Zangief... but his distance game was terrible.

All you need to know about the game's tone and humour can be found in its tagline below. 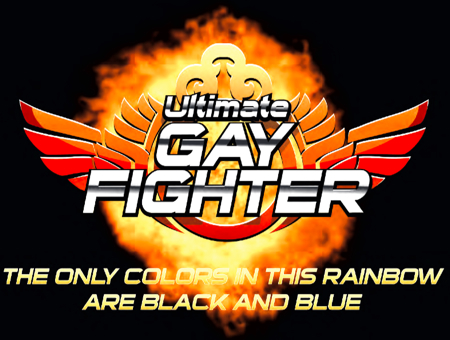 But in case you need more, here's the skinny.

Ultimate Gay Fighter is a love letter to both the LGBT community and the world of classic arcade fighting games.

You get to play as one of 10 representative LGBT stereotypes that include a leather-clad bear, a light-on-his-feet twink, and a wrench-wielding female construction worker.

Each character comes with their own distinct playstyle, voice acting, and special "gaytality".

These fabulous finishing moves run the gamut from eviscerating a hapless opponent with a well-timed insult to devouring them with your vicious Chihuahua, and they serve as the perfect tongue-in-cheek joke to end each match.

Heck, you don't even need to be gay to appreciate that last one.

Ultimate Gay Fighter is scheduled for an iPhone and Android release in January of 2014. If you can't wait that long to play "the first gay video game ever", you can check out the trailer below and head on over to UGF's official site for more information.