As the chill of autumn sets in, a dark and stormy Kickstarter has appeared for Mansion Lord.

This indie roguelike game mixes the murder-mystery world of Clue with the laid-back world of a Kairosoft management sim.

Add some 16-bit graphics and a chirpy chiptune soundtrack to the mix, and it's easy to see why Mansion Lord is a game worth getting excited over.

Gameplay begins with you focusing on building up your mansion to attract more guests. If you do, and you're lucky, murder will happen. Once the bodies hit the floor, visiting detectives will confront the suspects in the Hall of Accusation to engage in some turn-based combat. 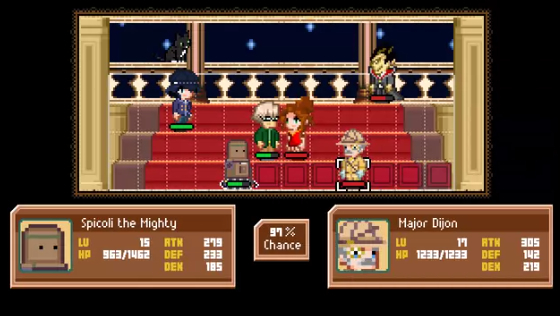 But this isn't the only time combat will rear its head in Mansion Lord.

If you need a break from building up your rooms and upgrading your detectives, you can send said sleuths dungeon crawling in the roguelike 'abandoned basement' levels to clear out ghouls and earn rewards.

As you'd expect, there’s a good amount of tongue-in-cheek humour in Mansion Lord that pokes fun at both Clue (hello to you, Major Dijon) and the world of 16-bit RPGs.

The only thing not to like about Mansion Lord is that it's a PC-exclusive at the moment and will only come to the iPad and PS Vita if it hits its $55,000 and $75,000 funding goals, respectively.

Still, there's 28 days left for it to find its feet, so we're hoping that we’ll have a chance to write about its pending iOS and PSN release before the year's over.
If you'd like to fund the game or just check out its Kickstarter, click the blue text here.