Subset Games has confirmed that FTL: Faster Than Light will be surfacing on the App Store early next year.

The game is all about the calamities and catastrophes that befall a spaceship's crew. They're on a desperate mission to get some tide-turning information back to their home base, you see.

As is always the case in these situations, though, some pursuing rebels or the cruel nature of space ruin their chances of returning to base camp.

Subset has also confirmed that FTL: Faster Than Light won't be playable on phones. That's because the quality of gameplay it's looking to offer just isn't possible on smaller screens. 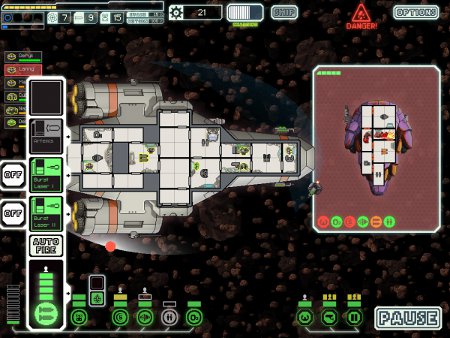 The version landing on the App Store will include all the extra content from the FTL: Advanced Edition update that is heading to the PC version at the same time.

If you're an Android or Windows 8 tablet user, by the way, there's no need to fret just yet. Subset has confirmed that it's focusing on getting the iOS edition finished first, then will turn its attention to versions for other operating systems.

We'll let you know the second we hear a more concrete release date for the iPad version of FTL: Faster Than Light. You should, however, consider us at deep space dementia levels of excited right now.

Want more? Check out our 13 other FTL: Faster Than Light news stories!

Subset Games has outlined some of the new content in the iPad version of FTL: Faster Than Light