Ganon you believe these picks!

This week, we will have a review of The Legend of Zelda: A Link Between Worlds, the latest entry in the Zelda saga. Until then, we'll be recalling our favourite moments from the handheld Zelda games on these here pages.

Every Zelda game has dungeons, and every dungeon has a boss. These titanic monsters lurk in the last room of each crypt, tomb, and temple, and present a fitting final challenge for Link to overcome.

Whether it's a giant slimey eye or a three-headed dragon or a pesky angler fish, these baddies are often akin to multi-step puzzles that you must solve while simultaneously fighting for your life.

Link has had some terrific showdowns during his career as adventurer / explorer / train driver. These are some of his very best battles from his backlog of portable games. 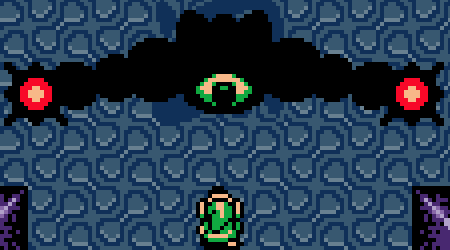 You know that feeling you get when you think you've killed a boss only to see the blighter get back up and transform into something even more hideous and frightening than before? The final boss of Link's Awakening does that five times.

The Shadow Nightmare has six forms, each of which forces Link to use different items and techniques that he's learnt throughout his dreamy Koholint Island adventure.

Some of the forms are eerie shadow doppelgängers of enemies he fought in A Link to the Past, like Agahnim and Ganon. Link is one tough little kid, but it seems like the horrors he's faced still haunt his dreams. 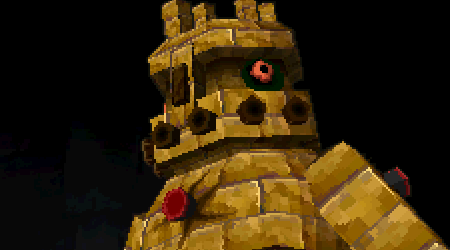 In Phantom Hourglass, Nintendo makes full use of the DS tech. This game has touchscreen combat, microphone-based puzzles, and - best of all - bosses so big they stretch across both screens.

Take Eox, a giant stone golem at the end of Mutoh's Temple, for example. To dismantle this towering colossus, you have to use springboards to bounce into the air, and then use your hammer to slug his big red pegs. 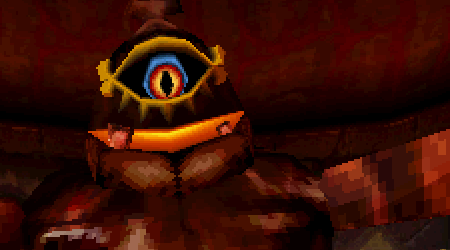 With Spirit Tracks, Ninty continues the trend of gargantuan Zelda bosses that couldn't fit into a single screen. The best one in this train-themed follow-up is sky-scraping lava giant Cragma.

To defeat this Fire Temple guardian, you have to leap into a mine cart and spiral around the volcanic monster, taking pot shots at his weak points with your arrows.

These DS boss fights aren't too hard, but they deserve respect points for being epic, jaw-dropping thrill rides. 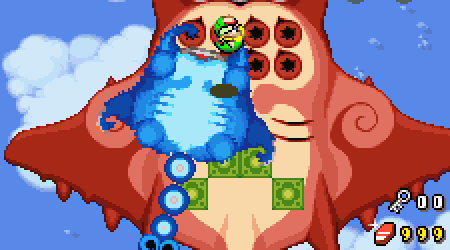 Many gamers say Twilight Princess's mid-air fight on the back of Argorok was inspired by the boss battles in Shadow of the Colossus. But Link was clambering around on the backs of his foes long before Team Ico's game came out.

In Minish Cap, you fight the Gyorg Pair by riding on their backs as they soar high above the Palace of Winds. You'll have to bounce between them using Roc's Cape, dodging energy beams, and hopping over spiky tails.

To kill off the main Gyorg, you need to split Link into three and pop three of its eyeballs in one synchronised sword slash. Satisfying, if vertigo-inducing, stuff. 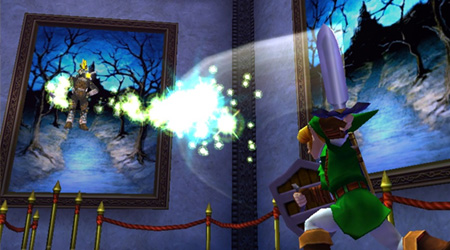 There were some truly epic boss battles in Ocarina of Time, but we didn't want to fill this list with loads of showdowns from an N64 game that happened to make its way onto handheld.

With this memorable fight, however, Nintendo and Grezzo made such good use of the 3DS tech we just couldn't ignore it.

Phantom Ganon, a.k.a. the Guardian of the Forest Temple, leaps out from one of six paintings, and Link must strike him down with a well-placed arrow. On 3DS, you can use the gyroscope to literally spin around in circles to look for creepy ghost Ganon.

All this adds a layer of physicality to the fight, and makes it more immersive and tense than ever before. He could be right behind you! After this, Link plays energy ball tennis with the spectre, which foreshadows the final fight with the real Ganondorf.

Want more? Check out our growing collection of The Legend of Zelda: A Link Between Worlds articles!

Tie-in mobile game for The Hunger Games: Catching Fire is a competitive endless-runner

History in Handheld: The Legend of Zelda

Zelda Week: Top 5 The Legend of Zelda dungeons on handheld

The Legend of Zelda: A Link Between Worlds