Watch the single most difficult Spelunky run ever: the solo eggplant Yama kill

This is the end

Spelunky has been out for over a year now, but super-talented Twitch.tver Bananasaurus Rex has just become the first person to complete the game's most manically difficult run: the solo eggplant Yama kill.

This involves carrying the fragile eggplant item (which you get when you sacrifice an unopened mystery box to Kali) through 20-odd levels and into the bowels of hell, then throwing it at super-secret boss King Yama's stupid face.

You can watch the hour-long video below. The run took place on PC, but - hey - you can get Spelunky on Vita (and there's no reason why you couldn't do this on the handheld version).

The mysterious eggplant's true purpose wasn't known until Spelunky HD was released on PC, and players pulled apart the game's files to find some clues. Soon after, biohazard063 slapped Yama with an eggplant in a co-op adventure - good, but a lot easier than going solo.

I'll explain why, but this might get a little 'inside baseball' if you haven't played a lot of Spelunky.

Essentially, if you're on your own, you can only take one item through the exit door in each level, and it needs to be the eggplant every time. That's all well and good, except for when you need to take Anubis's scepter from Temple 4-1 to 4-2.

To get around this, Bananasaurus Rex went into the mothership and rescued the robot, who acts as a computer-controller ally for as long as it's alive. The robot carried the scepter between levels while Rex took the eggplant.

Rise from your grave

More testing, however, is the fact that you'll be stuck inside the Maoi head after killing (and resurrecting) yourself in the Ice Caves, and you won't be able to take the eggplant with you.

There is, though, one known way to break the head open. The ball-and-chain, which is penance for destroying three Kali alters, can smash open the Maoi head. You can then remove the punishment by dropping it into the abyss below the Ice Caves. 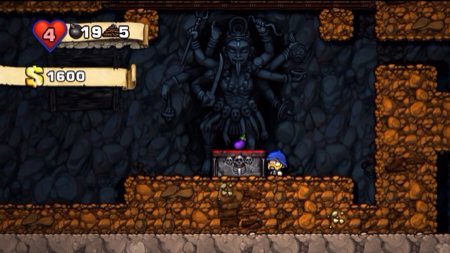 With all that figured out, you just need to complete the usual sequence of events to get to hell - key, chest, Udjat Eye, black market, Ankh, Hedjet, Scepter, City of Gold, Book of the Dead - then find Yama, blow up his hands, and throw the eggplant at his mug.

Towelfight 2: The Monocle of Destiny has gone free-to-play to help in dev Sam Coster's battle with cancer

Spelunky has been updated on PS Vita with leaderboard replays, ghosts, and more