Zelda Week: Top 5 The Legend of Zelda dungeons on handheld

This week, we will have a review of The Legend of Zelda: A Link Between Worlds, the latest entry in the Zelda saga. Until then, we'll be recalling our favourite moments from the handheld Zelda games on these here pages.

When you think of Zelda, you probably think of exploring lush green fields and navigating crystal-blue oceans. But the real heart of the game takes place inside and underground.

But handheld Zelda fans aren't left out of this party. From Game Boy to 3DS, Link's portable expeditions are home to some truly terrific temples.

Here are five of the best. 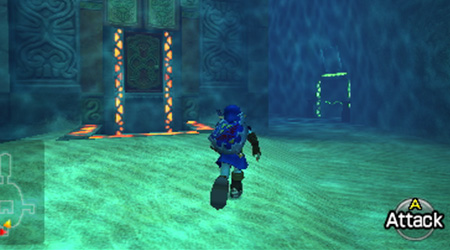 The Water Temple is often considered to be the worst part of Ocarina of Time. One rotten apple in a bushel of ripe, juicy Granny Smiths. Exploring this complicated, frustrating, obtuse, and unwieldy underwater labyrinth is about as much fun as doing detail surgery on Dodongos.

But Nintendo got a second chance with this 3DS remake, and it took the opportunity to fix its mistakes. It redesigned rooms; put handy coloured markers on the walls; and let you equip and un-equip the iron boots from outside the pause menu.

Once Ninty had fixed those issues, you were left with a clever and challenging maze-like temple of shifting water levels. You also get a showdown with Dark Link, and you'll walk out with an extended hookshot. 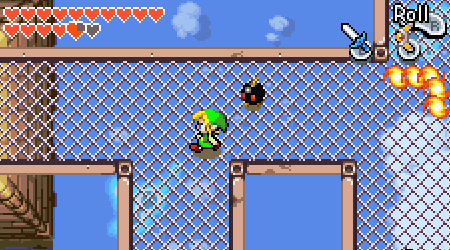 Minish Cap didn't have many dungeons, but Capcom made up for that with unique items (Mole Mitts! Gust Jar! The Four Sword!) and some great locations.

The final stop in your hunt for the elemental crystals takes you high into the sky, to a tricky dungeon that's made entirely out of clouds. Luckily, you've got the Roc's Cape, which enables you to jump and glide over great distances.

This tough dungeon concludes with a brilliant boss fight. It takes place on the backs of giant manta rays, and you'll bounce between them as they soar over Hyrule. To defeat the main manta, you'll need to split into three Links and stab three of its eyes at the same time. 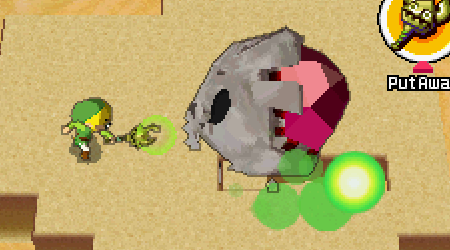 With most dungeons in Zelda games, Link can just wander right in. They don't even lock the door. Not the case with Sand Temple, though.

Oh no. Here, you've got to steer your train through three trials - including a crazy maze, a fight against a massive rock lizard, and a cannonball showdown against the temple's defences - just to gain entrance.

Once you're inside, you'll encounter an awesome item - the Sand Wand - which lets you raise pillars of sand by poking away at the touchscreen. Expect thoughtful puzzles and a tense boss fight against a towering skyscraper of a skeleton. 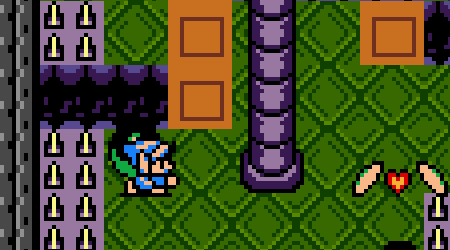 If you thought Zelda's first Game Boy outing would be a simple stripped-back affair, you should think again. It contained a huge world map, loads of side-quests, and some insanely complicated dungeons.

Take Eagle's Tower. Your main goal in this enormous skyscraper is to use a massive metal ball to smash the pillars that are supporting the fourth floor. That top level then drops down and becomes part of the third level.

It blew my dot matrix mind at the time. And few Zelda dungeons since have ever been subject to such dramatic revisions to their geography midway through your adventure. Just one of many reasons Link's Awakening holds a special place in our heart. 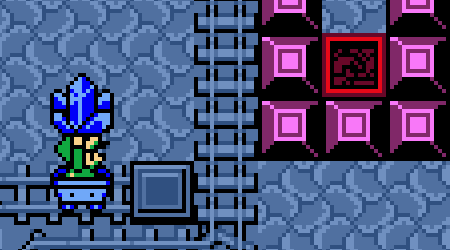 We've played ice dungeons in Zelda games before. And, boy, have we had our fair share of fire mazes. In Oracle of Seasons, Flagship's designers went into creative overdrive with the final dungeon, slamming these cliché elements together to create something new.

You've got the bottom floor, a hazy sword-shaped pool of lava. And then there's the top floor, a bracing icy grotto. The only way to advance is to push ice from one floor to another, to harden the lava below.

It also features the hyper slingshot; some terrific puzzle rooms; and a challenging conclusion in which you make use of all the items and techniques you've come across in the previous dungeons. Beautiful.

Want more? Check out our growing collection of The Legend of Zelda: A Link Between Worlds articles!

History in Handheld: The Legend of Zelda

The Legend of Zelda: A Link Between Worlds