Hearthstone: Heroes of Warcraft thinks beyond iPad, coming to iPhone and Android as well in 2014

It's a great big world of Warcraft

Way back in March, Blizzard announced that it'd bring its massively successful MMO World of Warcraft to mobile with Hearthstone: Heroes of Warcraft for the iPad.

The free-to-play card-battler looked a treat from what we've seen of it since then, but no doubt those without iPads felt left out in the cold like so much an orphan on the streets of a Dickensian Christmas.

There's a catch to the jubilation, however - as Blizzard announced that the iPhone and Android versions would be available in "the second half of next year". 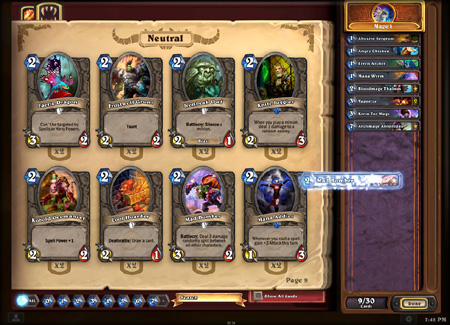 The Hearthstone news came during the opening ceremonies of BlizzCon 2013, when Blizzard's chief creative officer Rob Pardo justified the iPhone and Android launch by stating, "not everyone actually has tablets" before showing a build of Hearthstone running on an iPhone 5S.

iPad gamers will still get their hands on Hearthstone sooner rather than later, however, as Pardo noted it should be in open beta next month before quickly adding, "but in Blizzard language, that might mean January."

Want more? Check out our 94 other Hearthstone: Heroes of Warcraft news stories!