Out at midnight: Head to the Cityport of Kahre in Sorcery! Part 2

You port to play this

Inkle will publish the second chapter in its digital re-imagining of Steve Jackson's gamebook Sorcery! on the App Store at around midnight tonight.

In this new chapter, you are taken into the walled Cityport of Khare, a town of thieves, traps, monsters, and secrets. Sounds like Milton Keynes.

Once inside Khare, you'll have to make it across town... alive.

This city's got 400 locations to visit - which includes going down into the sewers and entering inside buildings. There are also more monsters to duff up and fresh Gods to worship. Oh, and there's a gambling game called Swindlestones.

Like the first episode of Sorcery!, this second chapter is a game about making choices, building up your character, and engaging in a clever narrative-driven combat system. We called that first instalment "a thrilling combination of fantasy novel and RPG", by the way. 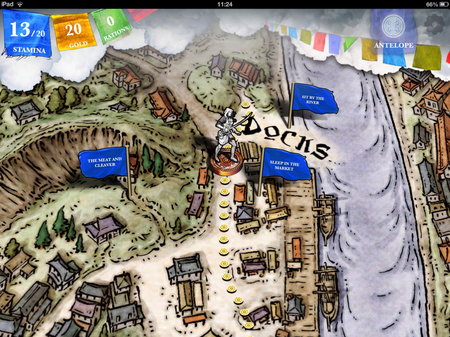 And if you managed to finish that first chapter, you can import your character and use him or her (inkle recently added female heroes to the series) in this sequel. Or you can start afresh. Up to you.

Part three of the Sorcery! saga, The Seven Serpents, has been pencilled in for April 2014.

Inkle reveals the reasons behind the delay to Sorcery! Khare: Cityport of Traps