Simogo on the powers of textual healing in DEVICE 6, and what the studio is set to serve up next

What a Year Walk it's been

The Gold Award-winning text adventure DEVICE 6 is a bit of a strange project, but we’d expect nothing less from a studio that dropped a be-suited horse into the middle of a river earlier this year.

If you haven't played Simogo's DEVICE 6 yet, it's a hard game to describe.

Drawing its inspiration from the surreal 60's spy drama The Prisoner and 'escape the room' style games like 999 - 9 Hours, 9 Persons, 9 Doors, it casts you as an amnesiac named Anna who finds herself enmeshed in the machinations of a faceless corporation.

"You can look at it as if it's a comment on Apple specifically, but I don't think it is," said Simogo's Simon Flesser talking to sister site PocketGamer.biz on the making of DEVICE 6.

"It's more of a comment on a lot of things in our society as whole, and some of the things fit the bill." 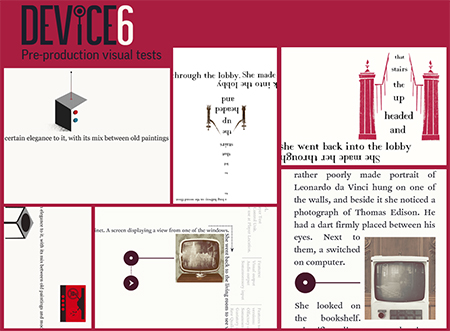 Although Flesser is quite proud of the music in DEVICE 6 he is, unsurprisingly, a bit partial to the importance of the story.

"We actually wrote the story to fit the ideas and messages we had in mind," says Flesser. "And I think that's why it works so well. Everything in the game, including interactions, puzzles and the hardware is part of the narrative.”

Given the small size of Simogo's DEVICE 6 development team - fittingly, made up of six members - it's amazing that it only took six months of work to bring the game to completion.

As for what's next from Simogo, Flesser wasn't quite as frank with the details.

"Tossing a few ideas around at the moment. Not quite sure! It'll probably be a bit until 'The Next Big Thing' - we have a few small things we want to do in between. Just trying out different stuff, not necessarily games."

If you'd like to read the full making of, head on over to PocketGamer.biz.