The GameStick is the latest Android-powered microconsole to make the leap from Kickstarter pitch to real world product. And it's one that takes the "micro" bit very, very seriously.

The console itself looks like a USB thumbdrive and is about as big as a packet of chewing gum. It slots right into the HDMI port on your telly - but it still needs power, delivered over a micro USB cable, to work.

It comes with Bluetooth-powered controller which is usable, but you wouldn't call it comfortable. It's flat, like an old NES pad, and it feels cheap and flimsy to the touch. The buttons feel mechanical and the D-pad is squishy.

The analogue sticks do feel surprisingly good under your thumb, but they don't work so well in practice. I found it very difficult to reliably aim at bad guys in burly steroidal shooter Shadowgun, even after fiddling with the sensitivity. 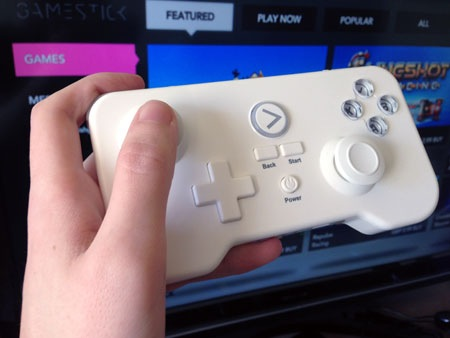 Unlike with the Ouya, you can't use Xbox 360 or PlayStation 3 controllers with the GameStick. That means you're stuck with this rotten pad, and need to shell out another £35 per player for extra controllers.

The operating system looks good, but it's generally quite slow, unresponsive, and prone to crashes. Games take forever to install, the controller gets laggy when apps are downloading, and the console itself can take up to two minutes to launch into a game (Ouya will have you playing in 30 seconds).

The GameStick's library of launch titles will look very familiar to anyone who owns an iOS or Android device. Of the 80-or-so games available on or around launch, almost every single one is a direct port from the App Store or Google Play. 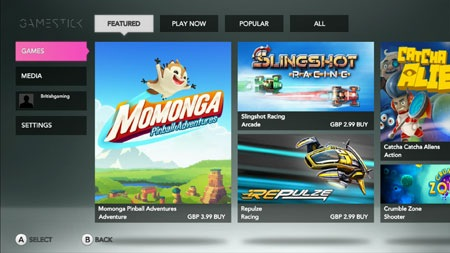 They're also predominantly paid-for games, often more expensive than the mobile versions (despite being near identical), and have no demos. You're going to be relying on reviewers (Hello!) for help.

The games are fine, but they're either silly time-wasters (like Knightmare Tower) which just made more sense on mobile, or console-style games (like Shadowgun) which can't compete when they're on the same turf as Xbox 360 games and sometimes struggle to perform on the underpowered GameStick.

The microconsole also doesn't have emulators, or at least not yet. 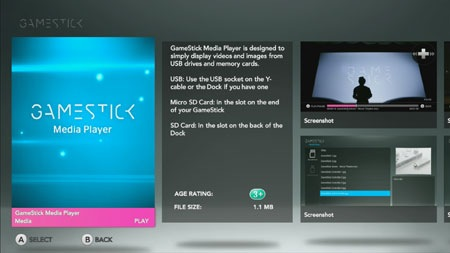 The real saving grace of the GameStick, though, is its media apps. It has a basic media player that can play practically any file from a micro SD card or USB stick, and Xbox Media Center for playing videos off a computer or external drive.

Xbox Media Center also lets you use AirPlay, so you can even stream videos from your iPhone or iPad.

GameStick does what it says on the tin - it's a tiny, ultra-portable games console that can play a handful of Android games on your TV. Whether that's an exciting concept is down to you.

But whatever the case, the GameStick is let down by a junky controller, sluggish interfaces, and an uninspiring selection of games. 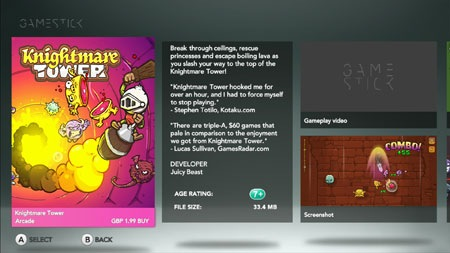 It currently fails to make a compelling argument against buying the Ouya (if you must have one of these microconsoles, at all).

At £20 more, the Ouya can do everything the GameStick can, but has more developers and exclusive games, support for Xbox 360 and PS3 pads, can play emulators and side-loaded apps, and has a better interface. There's no real competition.

GameStick is a portable and affordable media player, but falls down as a games console thanks to an underwhelming launch library, an uncomfortable controller, and some nuisance UI issues
By Mark Brown
| Oct 29, 2013 |
Android

GameStick will launch around the world on October 29th

GameStick releasing worldwide on September 30th, according to Amazon and GameStop listings