The way some people have been carrying on, you'd think that Apple had launched a stinging surprise-slap to the face of consumers with the iPhone 5S.

Why, it looks just like the iPhone 5. That's an awful lot of money (prices start from £529) for old rope.

Take a step back, of course, and you'll see that it's always been this way with the 'S' range.

Both the iPhone 4S and the iPhone 3GS before it stuck to the design template set out by their immediate predecessors. Apple reliably brings out a brand new iPhone design every other year, and those designs remain fresh for the entire length of a 24 month contract and beyond.

The iPhone 5 is one of the lightest, slimmest, and best-looking smartphones on the market - and so, by extension, is the iPhone 5S. Only the similarly sharp and metallic HTC One has managed to get close to this level of fit and finish over the past year.

Apple has tweaked and expanded its range of colours, which seems to help with two issues - the desire (from some quarters) for differentiation over the previous model, and the need to avoid those horrendously visible dinks many iPhone 5 handsets have suffered.

The headliner is the new gold model, which is proving very popular with those who want something a little different to the usual white or black variants. We opted for the somewhat more muted tones of the 'space grey' model, the edges of which seem a whole lot less likely to scratch when glanced at the wrong way. 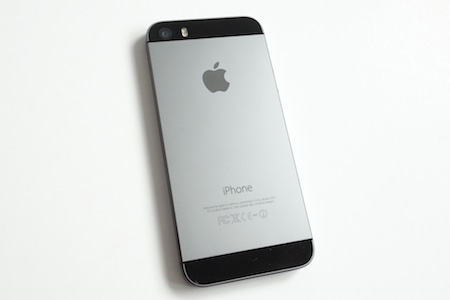 One week on and we can't see any dents or scratches to our iPhone 5S's chamfered edges - but we've ordered a case anyway, just to be on the safe side. After all, Apple has now launched a trade-in initiative in its UK retail stores, adding another incentive to keep those handsets looking tip-top.

Incidentally, you seem to get the same rattly power button/silent switch/camera component (I'm not entirely sure what it is) as has been present since the iPhone 4, if such minor details really bother you. 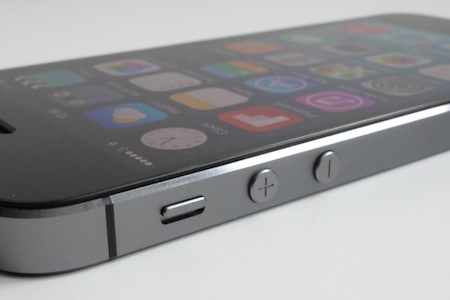 The only external changes with the iPhone 5S, other than those colours, relate directly to two of its biggest new features. Gone is the concave home button with the square symbol printed on it, and in comes a flatter, plainer replacement.

This is the newfangled Touch ID system you might have heard about. Touch ID grants you access to your iPhone 5S by scanning your thumb or finger print. If James Bond wasn't so enamoured with third rate Nokias and Sony Ericssons, he'd probably go for an iPhone 5S (with a hefty case, naturally). 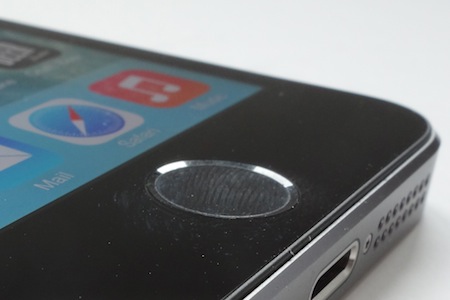 It works very well indeed, although we've had a few failures when using one particular finger's edge, or when trying to use it with damp hands. The former can be partially mitigated by redoing the calibration process properly, which asks you to tap the home button repeatedly in various finger-positions until the little fingerprint icon is fully lit up.

It's like the most fun police book-in ever, and is a great example of that hideous word 'gamification' at play. 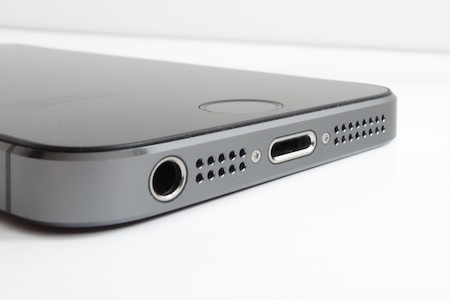 The other new external feature here is a slightly different flash configuration. As part of a considerably improved camera set-up, Apple has introduced a clever dual-bulb flash. One is blue, one is yellow, and the iPhone 5S can detect which mix of the two will create the most natural lighting for your immediate surroundings. It works, too, creating low-light images that are far less bleached out.

Of course, smartphone cameras are most at home in decent lighting conditions, and the iPhone 5S has been improved here too. Yes, its 8-megapixel configuration doesn't seem to be any better than the iPhone 5's, but guess what? Megapixels don't matter all that much with smartphones. 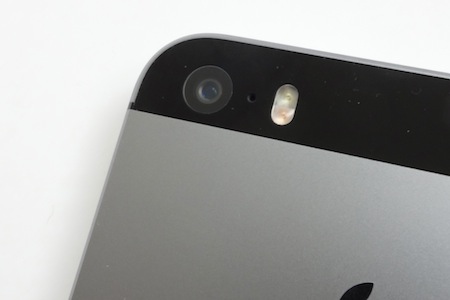 In fact, when image sensors are this small, more megapixels can be detrimental to image quality. It's all about letting as much light in as possible, and the iPhone 5S does that better than any iPhone yet thanks to a bigger image sensor, bigger pixels, and a wider aperture of f/2.2 (so it lets more light in through the opening).

Another cool new camera feature is slo-mo video. By shooting 720p footage at 120 frames per second, Apple enables you to slow a portion down without any drop in smoothness. It's perfect for action shots, as you can dip back in and change the slo-mo section after the fact with minimal fuss.

If nothing else it should markedly improve the quality of You've Been Framed (or whatever caught-on-camera show the kids are watching these days).

The iPhone 5S's screen remains identical to the iPhone 5. It's the same 4-inch Retina display, producing a resolution of 1136x640 and a widescreen video-matching 16:9 aspect ratio (still one of surprisingly few phones to do so).

Many people think that 4-inch screens are too small. They might be right, but then we'd argue that the 5.2-inch monstrosities that currently make up the Android elite go too far the other way.

When it comes to pocket gaming - which is what we're all here for after all - we'd definitely appreciate a little extra head room, and we hope that Apple releases a slightly larger (4.3-inch, perhaps) option in future. But here in 2013 the iPhone 5S remains the most pocketable, one-hand-wieldable, and - yes - MOBILE of high-end phones. And we reckon that still counts for something.

Other manufacturers make small-screen smartphones, of course, but they don't tend to be very powerful. The iPhone 5S is unique in that its petite frame contains a monster of a CPU.

The Apple A7 chip is 'only' dual-core, but it's built on a 64-bit architecture. We won't go into the boring details of what that involves - mainly because we don't fully understand it ourselves - suffice to say it easily doubles the computing power of the iPhone 5's A6 without dramatically ramping up the clock speed or adding more cores.

Sure enough, benchmarks suggest that the A7 is one of the most capable gaming phones on the market.

We've only got limited anecdotal evidence of this, as few games have been fully optimised for this new chip as yet. But Infinity Blade 3 looks truly stunning on the iPhone 5S, with additional lighting, high resolution shadows, full screen anti-aliasing, and other effects more typically drawn from a modern desktop PC graphics card. 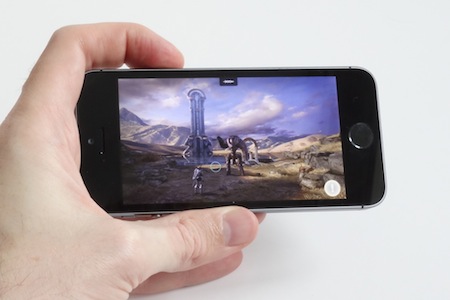 Apple calls the iPhone 5S the most forward-thinking smartphone it's ever made, and we think that games will provide the best evidence for this as more developers begin to harness the power of the A7 chip.

In addition to the A7, there's a new M7 coprocessor that's dedicated to detecting motion. This means that your iPhone 5S constantly knows which way it is aligned and how it has been moved, even when it's sleeping - and without sapping battery life.

This has been undermined somewhat in recent weeks with claims that the iPhone 5S's accelerometer isn't as accurate as the iPhone 5's. Apparently there's a greater margin for error in the component Apple currently uses, which effects everything from the compass app to - most worryingly for us - motion-sensitive games.

Is this a practical concern for gamers? In our experience, no it's not. We tried playing the tilt-heavy Real Racing 3 on our iPhone 5S, and found there to be no impact on play whatsoever. The thing is, in accelerometer-based games such tilting is always relative anyway - there's no need to align your phone perfectly along the x axis.

The important point is responsiveness, and on that front the iPhone 5S's accelerometer works just fine.

Battery life is a bit of a mixed bag, but is largely positive. In a day and a half of light usage - which included regularly checking emails, sending a few messages, making a couple of internet queries, and playing a couple of very brief games - our handset sipped just 50 percent of a full charge.

As soon as you start stretching the iPhone 5S's legs with intensive apps and prolonged gaming sessions, however, that power bar will plummet to nothing in a few short hours.

Of course, that's usually the case with modern smartphones. Suffice to say that the iPhone 5S easily lasts a day of moderate usage.

Unlike the safe, familiar design of the hardware, Apple's iOS 7 is a bold new step for the company. It comes preloaded on the iPhone 5S, and this is where it truly flies.

You can check some of the key features of this new OS in our hands-on feature. All we'll say here is that it was wholly necessary for Apple to do something new with its mobile OS, as it was starting to look more than a little tired.

iOS 7 is made up of largely positive changes and additions, such as the pull-up Control Center and the WebOS-style multitasking system. There are a few inconsistencies with its new minimalistic interface, but these are quickly overcome with use.

Ultimately, the iPhone 5S is a more-than-worthwhile upgrade for anyone coming to the end of a contract on anything other than an iPhone 5. You iPhone 4S owners will revel in the sleeker form factor, longer screen, vastly more powerful processor and considerably improved camera.

Meanwhile Android users fancying a change of scenery will find a slick, intuitive, pocketable smartphone with an unmatched library of games and apps. The screen might seem small, but then the entire experience (including apps) has been built seamlessly around it.

As we've come to expect from Apple's S-range, the iPhone 5S represents a subtle enhancement of the previous model. However, it's considerably more powerful than the iPhone 5, Touch ID is a genuinely worthwhile addition, and that compact design remains one of the best around.
By Jon Mundy
| Oct 22, 2013 |
iOS + Mobile