Mythic Entertainment - 'This is not Dungeon Keeper 3'

Mythic Entertainment's Jeff Skalski has a suggestion for fans who are pissed off that his upcoming free-to-play Dungeon Keeper game is not like the originals.

You're also still slapping imps to make them work harder. But in this mobile version, smacking an imp in the chops makes a four hour wait timer drop down to two hours. This is, after all, a free-to-play game, and the similarities to Dungeon Keeper end here. 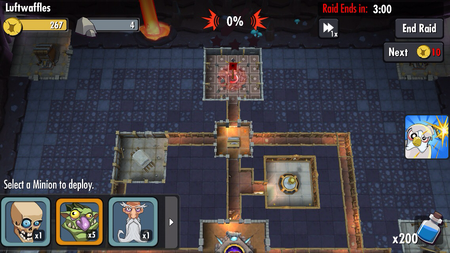 If anything, the new Dungeon Keeper actually has more in common with Clash of Clans than with Bullfrog's games.

The campaigns see you whisked off to another map, and have you drop a gaggle of summoned creatures into the outskirts as you watch them tear through an enemy's defences like a tornado.

You will be able to spawn from within your enemy's dungeon as you knock over new rooms, giving you more tactical locations from which to deploy your forces.

And your dungeon (you just have the one this time) is also open to attack - either through defensive missions or from other players while you're not around to defend it. Here, your gold and stone mines become entry points for enemies.

So, as in Supercell's billion-dollar RTS, you must litter your dungeon with traps and other defences, and use your dungeon's walls (and doors) to pen invaders into thin corridors of death. You can also pay to stop anyone attacking your dungeon for a short while.

You can also use spells - either while attacking or defending. One lets you knock out walls with a suicide chicken bomb, and another is like the classic thunderbolt attack from the old games. 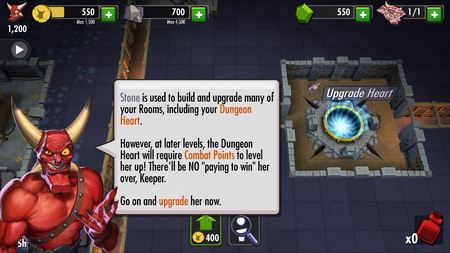 Despite the changes, there's still a chance that Dungeon Keeper fans will find things to like in this game.

But while the game is "for the fans", it's "just as much for strategy mobile consumers", explains Skalski. As such, it's designed for "people to get in and get out pretty quickly if they have two minutes. That's caused us to mould the game very differently".

The most obvious outcome of this desire to court mobile gamers is the incessant wait timers that drag every action out, unless you're willing to pay to expedite matters. Everything is tied to timers, which means you can't play it in one binge-like session like the original games without getting a second mortgage. 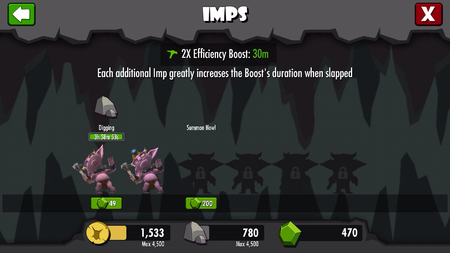 That's one reason the game has received such a negative reaction from long-time Dungeon Keeper fans. We ask Skalski if the angry comments, tweets, and forum threads are demoralising for the developer (which last gave us the enormous Ultima Forever).

"It's honestly part of the business. We know that any time you touch a classic game, the fans feel like you're playing with their memories because they're passionate so they're very protective of them," he says.

"Those are your memories with that game, those are untouched." But he hopes that Dungeon Keeper fans will give his game a shot. "We are doing things differently, but there's no reason not to download it".

Dungeon Keeper is in region-specific soft launch on iOS and Android. It should be out worldwide before the end of the year.