Gorgeous robo-puzzler Machinarium will be squeezed onto iPhone next week

Plus: Botanicula iPad 'should be released this year'

Tin can robot adventure game Machinarium will be available on iPhone from next week in the new microscopic Machinarium Pocket Edition.

Pinch-to-zoom will be employed in this iPhone version so that you can hunt through Amanita Design's hand-drawn backdrops for handy items and hotspots.

Machinarium, if you haven't played it, stars a stretchy robot boy named Josef who's been tossed into the scrapheap outside city limits. He needs to sneak back in, avoid bully bots, save his girlfriend from robo-slavery, and defuse a bomb.

In our review of Machinarium, we said: "Its puzzles are great head-scratching fodder, but the game's real champion is the rustic charm of its world, the bouncy jazzy beat of its soundtrack, the characterful animations, and an understated yet heartfelt story about two robots in sappy robo-love." 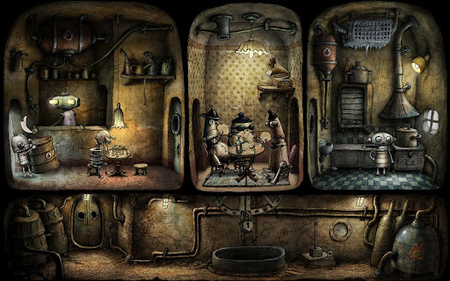 At the same time, the iPad version will be updated with pinch-to-zoom, first-gen iPad support, Retina display visuals, Game Center achievements, and iCloud save. The iPad version will also be transformed into a Universal app so you can play it on your iPhone.

Oh, and one last thing. Amanita's Jakub Dvorský tells Pocket Gamer that Botanicula - the studio's excellent organic point-and-click adventure - should hit iPad before the year is through. Colour us a dark shade of jazzed.

Want more? Check out our 13 other Machinarium news stories!

Grab your own Josef the robot from Machinarium, in plush form