Which is the best budget Android tablet?

Punching above their weight

There was a time when getting anything but an iPad at Christmas for your family left your loved ones feeling dreadfully disappointed.

But things have changed. High-performances tablets running Android like the Google Nexus 7 and Amazon's Kindle range are selling like gangbusters. All the while, the Android OS is being improved and enhanced for touchscreen slates.

But what about the budget 'droid tablet devices? Are they still the cheap tat you wouldn't wish on your worst enemy? Sluggish disasters that end up as little more than paperweights?

We thought it was probably a good idea, then, to put some of these budget beasts to the test to find out. Sufice it to say, we made some interesting discoveries.

Starting from just £99, all the tablets tested below boast at least a dual-core processor, 1GB of RAM, and Android Jelly Bean, ensuring you will be able to install all of the latest apps and games without difficulty.

So, it's time to put your preconceptions in a drawer and read on...

When Tesco announced it was entering the tablet market with its own-brand device, I initially feared the Hudl would be cheaply built and loaded full of Tesco apps and branding.

Fortunately, this wasn't the case. Yes, there are Tesco apps for grocery shopping and checking your Clubcard points pre-installed here, but most of these are hidden away. 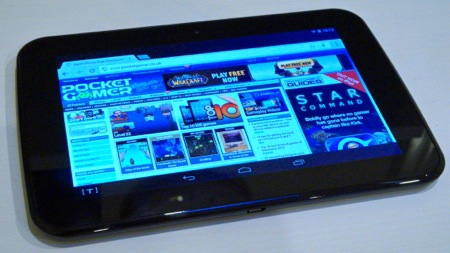 In many ways, the Hudl is akin to Google's original Nexus 7. So, yes, expect a high-quality display (with a 1440x900 pixel resolution), a native Android launcher, and stock user interface.

The Hudl also supports dual-band wi-fi (2.4GHz and 5GHz) and has a memory card slot for expanding the storage beyond the default 16GB. 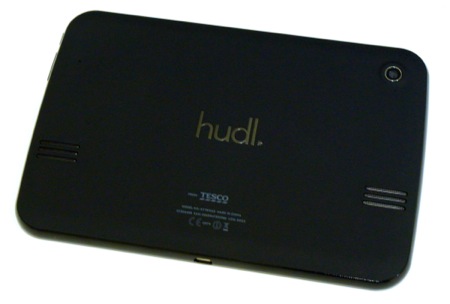 Most impressive of all, though, is the performance of this £120 tablet (reduced to just £60 if you have Clubcard vouchers).

With an AnTuTu benchmark of 18,009, the Hudl exceeds the score of Google's first-generation tablet (13,682) by some margin. It's not far behind Sony's Xperia Z on this benchmark test, either! 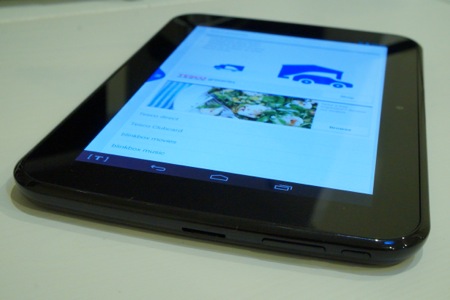 As a result, there's no need to worry about its ability to play games or cope with HD video content. Hudl is well built and ships with a range of tailor-made accessories, including a kid-friendly bumper case.

As with all powerful tablets, battery life could be an issue for power Hudl users. But for things like playing movies, the Hudl managed to last for around eight hours with the screen on.

This is a slightly odd tablet. Not odd to look at (although the exposed memory card and SIM slot is slightly queer), no. Rather, the strange default screen layout.

You are presented with tiny icons and text, you see. As if the manufacturer is trying to fit the detail of a 27-inch iMac onto the display of an 11-inch MacBook Air.

Even with the font size set to 'large', as it is by default, you'll need excellent eyesight to read everything on this tablet. 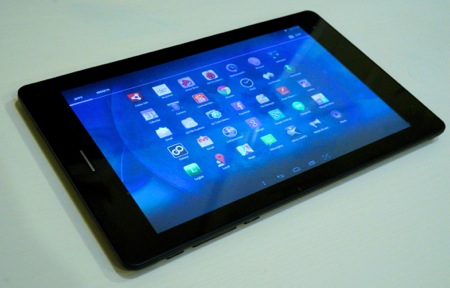 On a much larger display via Miracast, however, the text becomes more legible. Should you wish to be productive and edit documents or spreadsheets on a TV or monitor, this may be the tablet for you.

But let's be honest here: you probably won't be doing that at all. 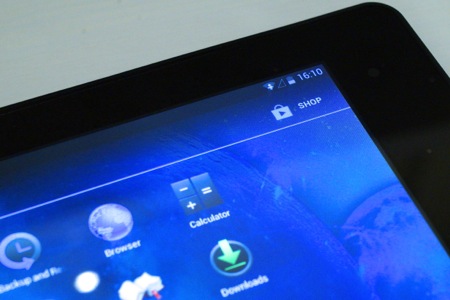 The quad-core Aries 70 finishes third in the benchmark test, but is still some way behind the Tesco tab.

And like the Archos tab below, there's a pitiful amount of internal storage set aside for apps here. That has an obvious impact on the amount of software you can install directly to the device if sideloading to a memory card isn't an option. 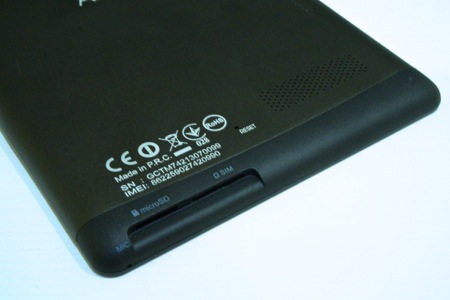 The Aries 70 was designed for the eastern European market, so some of the pre-loaded apps are less than helpful to UK consumers (including a navigation app with maps for places like the Czech Republic).

Ultimately, though, the Aries's small footprint, fast performance, and 3G connectivity make it a worthy contender... as long as you have perfect vision.

First off, Archos has been in this business a long time. It knows the industry inside out.

Second off, the 80 Xenon is one of the few tablets you can still pick up with a 4:3 ratio screen. It seems out of kilter with the current trend for widescreens, but it works for Apple, right? 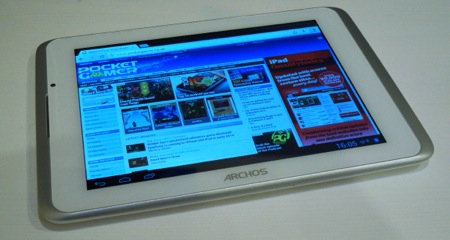 What separates the 80 Xenon from most of the tablets on this list is a SIM card slot, allowing you to use 3G mobile data on the move. It will, of course, mean extra costs, but it could prove invaluable for some users.

With a larger 8-inch screen than all the others, the 80 Xenon presumably packs in more pixels than the rest. Quite the opposite, in fact. Archos's tab has the second-lowest overall resolution at 1024x768 pixels.

Although fairly nimble in operation and undeniably attractive, the 80 Xenon can only produce a benchmark score of 10,692. 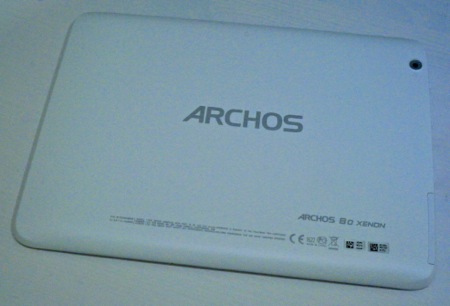 However, when running Riptide GP 2 on the 80 Xenon side-by-side with Tesco's Hudl, I couldn't detect any appreciable differences in performance. Perhaps the reduced number of pixels on the Archos machine is the key.

Like Tesco, Archos includes some of its own apps on its tab to add further value, like an Archos music / video store, 3D magazine store, and an app that enables you to use another Android phone as a remote control.

There's no HDMI output, mind, while the onboard Android 4.1 means an older screen layout (with the status bar at the bottom of the screen rather than up top). 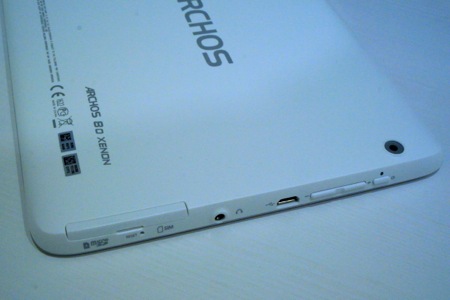 Internal storage is limited to just 1GB for apps and a further 2GB for storage. Although you can add more space for media storage via the card slot, that low internal amount seriously limits the amount of apps or games you can have installed overall.

The large 4200mAh battery, however, is a boon, as is the 3G connectivity.

There's a certain level of expectation about this tablet. Mainly because it's from the company behind both Nexus 7 devices.

But there's a reason why this tablet retails for £129 and not £200. Despite looking very similar to the first-generation Nexus 7 and having the same 1280x800 pixel resolution as Google's slate, the MeMo Pad HD7 has an undeniably cheaper feel.

With a benchmark score of 13,216, it's only a fraction slower than the first-generation Nexus 7.

And with a full 16GB of internal storage available for apps, it's a great choice for users. You won't need to ever uninstall a game in order to play another, basically.

The 4325mAh battery is also one of the largest in this group test, while the screen is bright and clear. 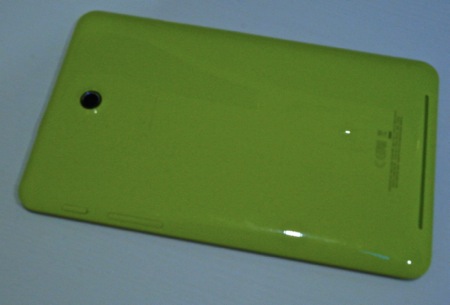 While the Tesco Hudl is £10 cheaper and performs better than this Android-powered gizmo, the MeMo Pad HD7 sports a 5-megapixel autofocus camera.

Oh, and a number of Asus-specific options to maximise battery life and make your daily life a bit easier to manage (such as a range of small apps that float over the display, giving quick access to things like a calculator, video player, calendar, or email). 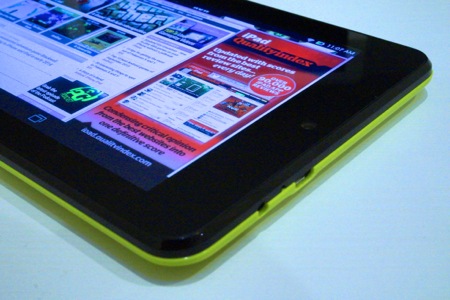 There's obviously a good reason why Asus builds tablets for Google. And even though this tablet is built to be sold at a lower price, the MeMo Pad HD7 still performs well and comes a worthy second to Tesco's impressive effort.

First things first: don't be tricked into thinking that the MyTablet is in any way like an iPad. That's despite Argos's rather brazen attempt to mimic the Apple design here.

Just because it has its capacity written on the back in a rectangle and the words "Designed by Bush in the UK", don't be fooled into believing this is as close as you're gonna get to an iPad experience without the iPad. 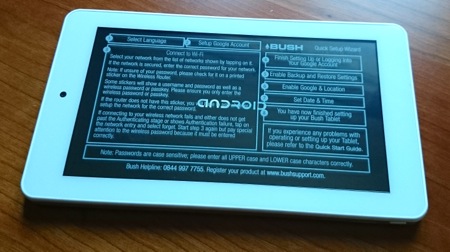 The MyTablet is quite clearly a China-made tablet that someone from Argos (which owns the Bush brand) spotted when scavenging for a low-cost tablet to put on sale for Christmas.

The end result is a shoddy plastic build, sluggish performance, and a disappointing screen.

Rather inevitably, this means the MyTablet is a device you'd be devastated to receive on Christmas Day. And any argument about 'it only being £99' and you 'shouldn't expect too much' is rendered null and void by the fact that Tesco has managed to deliver an excellent product for just £20 more. 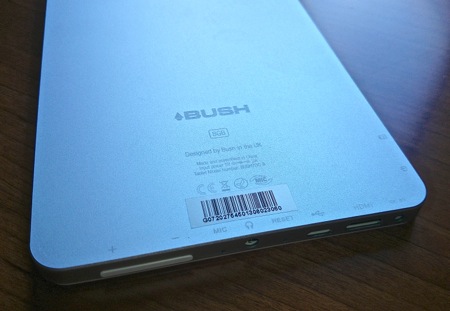 So, what's REALLY so bad about the MyTablet? Well, where to begin...

Firstly, the setup process should set alarm bells ringing. Upon setting the device up for the very first time, you're asked to choose between the native Android launcher or an Argos one.

After you eventually get it all set up (and if you chose the Argos launcher, you chose poorly), you'll soon discover you're bombarded with ads from some random third-party store. Ugh.

Even before you run a single app, you'll come to hate this tablet's washed-out, low-resolution (1024x600 pixel) fuzzy display.

On the subject of applications, all Argos really needed to include here was an app to show the nearest store from where you can go get a refund.

The MyTablet is another device with just 2GB of app storage space. If you're wondering how that 'tallies' with the "8GB" branding on the back of the tablet, it's because the space is partitioned - 4.23GB is the storage space you end up with after the other overheads.

There is an external card slot, and the MyTablet does support Miracast and HDMI out. But that can't save this monstrosity.

It's painful to use, though its benchmark performances are slightly better that the Archos's, making it only the second-slowest device overall. However, the Archos has a nicer screen, is better built, and doesn't look like it will fall apart in a few months.

It's great to see that it IS possible to bag a good-quality Android-powered tablet for under £200.

I mean, Tesco has produced something that far exceeds expectations. It leaves me genuinely excited about what it will do next, with rumours circulating that Tesco could end up manufacturing a low-cost smartphone with high-end performance.

Guess we'll just have to wait and see.

Swim under lily pads, eat flies, and flee from bigger fish in Guppy for Android