Will she pass the test?

I've always wanted to be the "Perfect Woman". Society seems to insinuate that as soon as you appeal to men in all the right ways, all gates magically open for you and you never have to worry about bills ever again.

Also, it seems, you are nothing without a man who can validate you like a parking ticket. You must talk about how amazing he is all the time and how all of his hobbies have become yours, and how you are now a unit who has all of the same interests.

So when this amazing quiz called Perfect Woman Test popped up, purporting to be an iOS quiz to give to women to check if they are hot babes or not, it seemed the ideal way to test why I am such an uncool, single, awful person.

Ostensibly it seems like an app made for pick up artists, in that it suggests that this is a "hilarious yet strangely accurate test" that is for "guys wanting to approach a girl in a night club, in school, at a party…" (Is school the best place to look for the perfect "woman"?)

The app description also implies that it is for women who want to check that they are within the acceptable number rating. You know, to check they are not some sort of Grosslady McFeminazi who will burn your house down if you ask them to do the dishes. 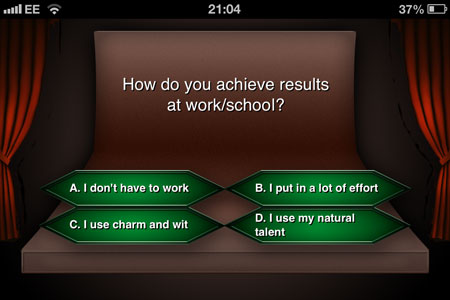 I asked my friend George to administer the test to me. After applying the electrodes and strapping me down as I frothed at the mouth, he asked me the question: ‘How do you achieve results at work/school?'

Assuming that the Worst Woman would answer the first, I was stuck with deciding on the last three. I guess I try to be witty in what I write? But that takes a lot of effort, and also talent. I answered the witty one, as I assumed most amazing girlfriends are probably really fun to be around.

It turns out that most amazing girlfriends are much more talented than they are witty. If you have a witty girlfriend, tell her to stop trying to be funny and ask her to get really good at a skill instead. 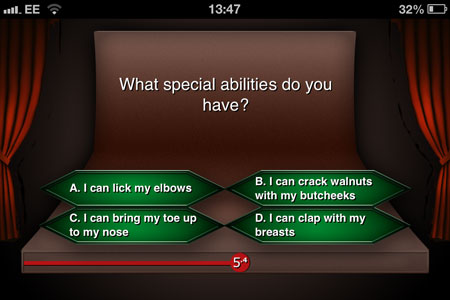 After being tested on what sport I like (apparently yoga and tai chi are the best sports for women to be into) and being asked what my future outlook is (you can choose from businesswoman, housewife, and party girl 4eva) a later question asked me what I'd do if my boyfriend worked till 9pm and just got home.

There was no answer that was ‘call him from Paris to tell him you are reviewing a Ubisoft game and to see to himself until I get back tomorrow' so I went for ‘A: Quickly whip up a hot meal for him' in the hope that the best woman would be some sort of cook. It scored well.

Most of the questions seemed to mark sexual agency very low: any answer that implied that a woman might enjoy sex with more than one partner was marked pretty low. One question asked what would be essential to be in your purse on a night out. You'd think being cautious would be high on the list of lady perfection, but choosing ‘condoms' was the lowest marked answer. 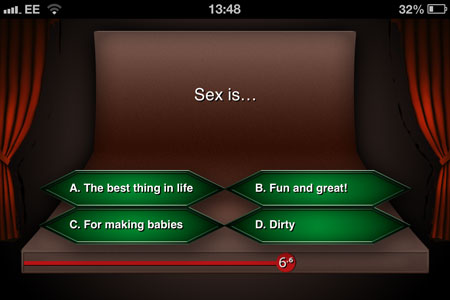 My favourite question of the set was one that described a situation in which your car tyre is flat, it's raining outside, and you have left your house with NO BRA on. What do you do?!

Why would not having a bra on make any difference? Rain doesn't automatically make boobs explode. You might… get wet whilst changing your tyre? Or, you might call a tow truck from the dry interior of your car? Oh the moral indecision. This is harder than Mass Effect.

The quiz's scoring system was much more heavily weighted towards the questions based on looks and appearance. Most situational and attitude based questions only gave 0.1–0.4 on the points scale. Answering that my body is ‘curvy' instead of ‘well rounded' scored much, much higher (though, if you are administering this test to some woman you have met in a club I think you'd have an idea of what she looks like).

This quiz also asked me what ‘cat' I am in bed. I answered ‘naughty puma' but I couldn't figure out if that was bad or not. 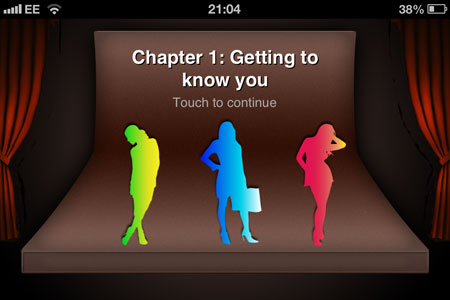 You can certainly ‘game' the answers by doing the quiz several times, but my first score was an 8 out of 10. George immediately proposed to me. (He didn't. He was disappointingly composed.)

I am an 8! A Silver Award. What do I do with this information? Is that an IGN 8 or an Edge 8? Should I call a PR person to yell at him for the quiz only giving me an 8? I don't really know.

Anyway guys, call me. I change tyres in the rain with no bra on.