Don't let the cuteness fool you

The cast of the upcoming Super Smash Bros. keeps getting stranger and more wonderful by the day.

Back at E3, Nintendo announced that both Mega Man and the Wii Fit Trainer Girl would join Animal Crossing: New Leaf's Villager in the cast of Super Smash Bros. for both the 3DS and Wii U, but now a new challenger has been added: Toon Link.

Technically, it should be 'cel shaded Link' but whatever - he's cartoony enough for it to work, and he's at least 52 percent* more cartoony than regular Link (who's still in the roster by the way). 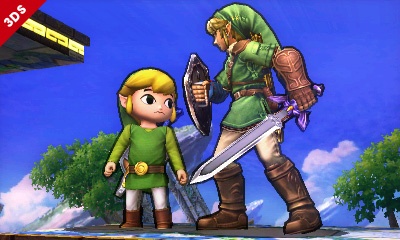 Toon Link made his debut in Super Smash Bros. Brawl for the Wii as an unlockable character, and it make sense for him to return to the franchise given the upcoming release of Wind Waker HD for the Wii U.

Still, fans of the Platinum Award-winning Phantom Hourglass or the Gold Award-winning Spirit Tracks will be happy to see him return as a playable character all the same.

We still don't have a release date for Super Smash Bros. just yet, but you can expect it to arrive sometime in 2014.