You may want to sit down for this.

That said, there's a lot more content in this Rayman follow-up, and a few more play options.

Huge step forward or not, then, Ubisoft's forthcoming Rayman Fiesta Run is shaping up to be the premier auto-runner on mobiles and tablets.

Picking up the pieces

If you haven't played Rayman Jungle Run yet, here's the lowdown: you automatically run through 2D levels based on the worlds from the Rayman Origins and Rayman Legends universe.

You can perform actions as the titular hero via a movement button and an attack button.

Tap the former and you'll jump, wall-jump, hover, and so on. Tap the latter and you'll thwack enemies and smash through obstacles.

It's streamlined stuff, and the minute-long levels are perfectly designed for quick bursts of gaming. 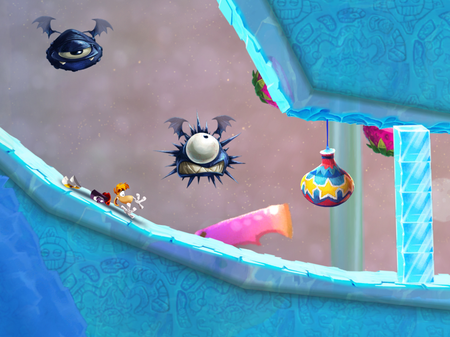 It's a good thing the levels are short, too, for Ubi ramps up the game's difficulty within a dozen levels or so.

Get hit once by an enemy or fall foul of one of the umpteen hazards in the game - such as pools of acid, fast-flowing lava, and knives that shoot through the air - and you'll be forced to restart the level.

Much like its mobile predecessor, Rayman Fiesta Run is a game about practising your runs and perfecting your timings. So, yep, it's the kind of title that fans of platformers such as Super Meat Boy and Kid Tripp will lap up.

A helping hand for the armless one

However, there are ways in which Ubisoft can help you improve your times. During the game, you are offered power-up items that will assist you.

There are straightforward boosts, such as the ability to temporarily improve the reach of your attacks, for example. The most, well, forward-thinking power-up, though, is one which draws the optimum line for each level.

Much like a racing line in a simulation racer, this power-up supplies you with the ideal route through a stage. This, in theory, should enable you to learn and memorise the precise moves you need to hop, skip, and jump to snag every Lum and every coin. 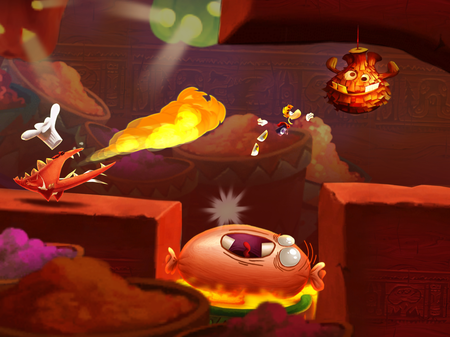 This is, of course, really useful. Where I'd been thwarted on a level previously, I found I could then go on to make significantly easier progress, yet still complete the level myself, with this helping hand.

These bonuses come at a price, though. You need to spend currency on them, and they're only valid for one run. If you run out, you'll need to grind for the currency or spend cash on in-app purchases.

But is it art?

As noted above, Rayman Fiesta Run is incredibly similar to the first game. And that's a very good thing, indeed.

This is more of the same but more of it... and in more diverse settings. Along with the ability to swim in the game, you can now glance at a world map in Rayman Fiesta Run.

With an autumn 2013 release date attached to Rayman Fiesta Run (and a tentative "November" date from the game's producer), keep an eye on Pocket Gamer around then for the full review.