Heading to iOS and Android in October

We've all seen the world taken over by aliens. And robots and zombies and even hyper-intelligent apes.

But bears? Now, that's new. And it's the plot of Kickstarted brawler Fist of Awesome.

The game takes place in a post-apocalyptic world, where woodland creatures have risen up, taken over the world, and enslaved all humans.

As the last free human - limber lumberjack Tim Burr - it is your duty to punch those bears in the face, stomp on a buck's balls, and do a flying kick into a gang of street punk stags.

You've got a pretty handy move-list. You can kick, punch, stomp, and throw your mammalian enemies; jump and do flying kicks; and unleash the titular (and talking) closed hand. 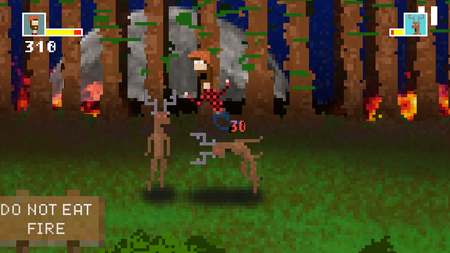 You make your moves with taps and swipes, and this works surprisingly well on the touchscreen. Think the eminently controllable Combo Crew, and not those fiddly Sega arcade ports.

Fist of Awesome becomes a bit repetitive, but it's as repetitive as any brawler. Along the way, you'll enter new areas (like Bearhatten, with its vomit-inducing "Bare Bears" strip club), fight new critters, and level-up Tim's attributes.

The whole game has a cheeky, and very British, sense of humour. That's evident in the funny cutscenes (well, some are funnier than others - Gangnam Style jokes went out with the ark), the hand-made sound effects, and the super-goofy pixel-art visuals. 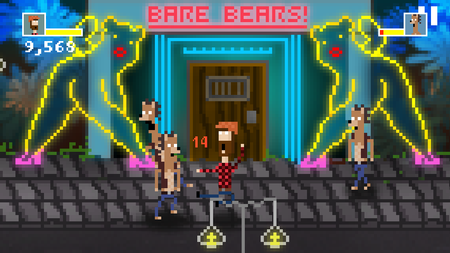 Saying that, those visuals are a bit unsightly at times. Some of the art really straddles the line between scrappy and crappy, and the different styles - like the lanky Tim with his pixel-thin limbs and the more detailed backgrounds - can clash in a garish fashion.

Fist of Awesome is generally quite funny and is a fine little mobile brawler. If you like punching the same enemy over and over again while you inch along a side-scrolling street, you'll probably like it.

It'll be out on iOS, Android, Ouya, and GameStick on October 17th.

Want more? Check out our growing collection of Fist of Awesome articles!