"You should pack your bag for Marseille," my aunt instructs me, at 10.30pm.

"Cara stop playing that thing and pack your bag."

"I am," I insist. "This game is called BEEFWAR. It is a lot more literal than I thought. I have paid 69p for this game and it is a game about beef cuts fending off Panzer tanks. I have a column called ‘Crap Apps' and this is a game I am reviewing." 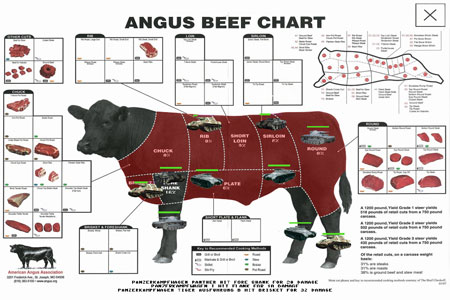 She sits down and watches me.

"See," I say, pointing to the rump of the cow on the screen. I tap a cut, and the game shouts "BONELESS RUMP ROAST!" and the meat hunk hits a small but persistent tank that is sitting on the cow's backside. Bam! The tank's green health bar goes down.

"I am bombarding some Panzer tanks with the corresponding beef cuts," I explain. "See, I haven't got any sirloin cuts left so I can't kill that tank there." I point to the section on the cow picture designated ‘sirloin' surrounded by a dotted line.

It is unclear how you lose this game but you do eventually lose it. The tanks swarm over your cow and shell the crap out of it and then eventually you run out of beef cuts to lob at them. The highest score I've got is about 2200. 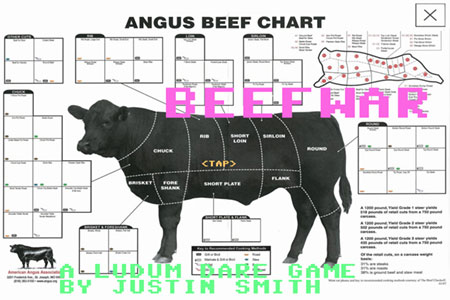 My aunt is laughing. "What is the best cut of beef?" she asks.

"Well that is EASY," I say. "It's obviously cubed steak or ground beef, really anything filed under ‘OTHER CUTS' is the best," I nod, directing my finger towards cubed steak.

"CUBED STEAK!!!!" the game shouts, and then the cubed steak does an aerial bombardment over the cow, hitting all of the tanks on the cow's parts.

"I really like ‘OTHER CUTS'," I say. "I think ‘OTHER CUTS' are the best part of the cow, mainly because they can kill a lot of tanks at the same time instead of just one."

Internally though, I am not sure ‘Other cuts' are really the best part of the cow. Someone once told me that minced beef actually has sawdust and chicken lips in it and that doesn't sound like it would really fit in my spaghetti bolognese. 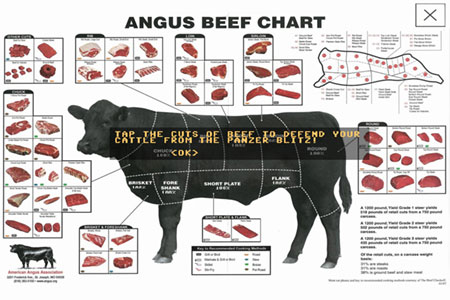 When you start this game it yells ‘BEEFWAR!' at you and you are presented with words that suggest that it was made for online game jam Ludum Dare.

If anything it has excellent audio, entirely provided, one assumes, by the developer Justin Smith's squeaky nerd voice shouting each cut of beef on the American Angus Association's beef chart into a mic. It also has a soothing organ chords going on in the background which is punctuated by the explosions taking place on your cow.

The cuts initially flash up on the screen in a pleasing, if totally unnecessary display of beefery. The instructions tell you ‘Tap the cuts of beef to defend your cattle from the Panzer blitz!'

"OK" is the only thing you can press, so you are forced to agree that this is the best course of action.

I wonder what has caused the Panzers to attack the cattle with such vehemence. Perhaps the cattle have eaten all the Panzers' creme brulee and the Panzers are simply blowing them apart to reach the creamy insides? Poor Panzers. Creme brulee is pretty excellent. Cows are rubbish. 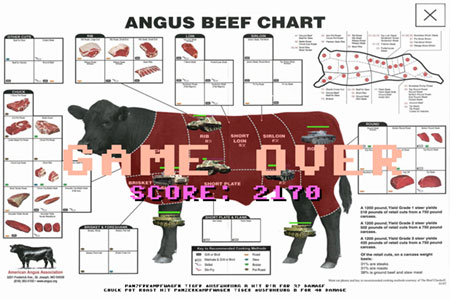 I am not sure whether Justin got the American Angus Association's blessing to make BEEFWAR, but at the bottom left of the chart their details are right there. A clear endorsement to buy Angus beef from American outlets. It is working. I feel a bit hungry. And a bit tanky.

"Honestly, though, can you pack your bag," my aunt, says, attempting to tidy around me.

"BEEF FOR KEBAAAABS!" my phone shouts, and explosion sound effects echo around the room. I sigh. "Okay then," I say, thinking I have run out of ‘OTHER CUTS' anyway.