Since Google announced the eye-opening (and eye-tracking) Google Glass, there's been a lot of discussion about its practical uses.

However, while we've seen plenty of videos demoing the unit's ability to capture video or find the nearest Starbucks, we've seen precious little about its potential as a gaming device.

As it happens, at least one developer has been working with Google to harness the power of its high-tech goggles to beam mobile games directly into your eyeballs. Well, eyeball.

The developer in question is AMA Studios, which has been building a Google Glass-friendly version of its swipe-and-jump puzzler Escape!

As you can see from our hands-on video below, the port is unfinished. However, we were still able to get a feel for the controls, and a sense of what it would be like to use the headset as a gaming device. 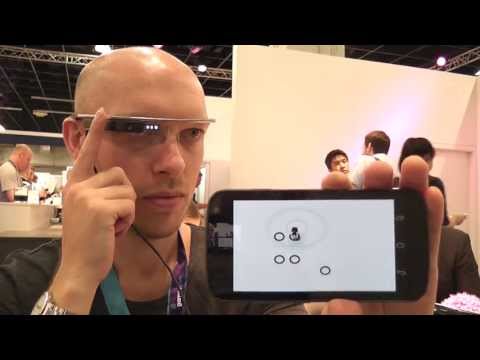 So, about that gameplay. It's dead simple: you just have to guide your jumping avatar between a series of hoops.

You can move up, down, forwards, and backwards - commands which are handled by the touchpad on the side of the glasses.

The aim of the game is to clear the screen by working out the optimum route to take between the hoops.

For the most part, the touch controls worked fine. We did have some issues getting the 'up' command to register, though we're not sure whether that was down to the code or the touchpad.

Once the game is finished, you'll also have the option to use voice controls. Whether it works or not remains to be seen, but it's good to see all facets of the headset's capabilities being utilised for gaming purposes.

Though we left the presentation more interested than enamoured with the headset version of Escape!, we're hopeful that other mobile developers will step up to the Google Glass plate over the coming months.

[Update] Gold Award-winning He-Man: The Most Powerful Game in the Universe is now on Android