'Dystopian documents thriller' Papers, Please is heading to iPad and Android in the future

Indie developer Lucas Pope is planning to port his recently released bureaucracy sim Papers, Please to tablets, but tells Pocket Gamer that he's not confident the game will get through Apple's unpredictable approval system.

Papers, Please is a dark and bleak game. You're an immigration inspector on the border of the Soviet-style state of Arstotzka. It's your job to approve or deny visitors by checking over their paperwork.

You have to look for discrepancies and errors on the papers of every person who visits your booth, as you hunt down invalid, out of date, and faked documentation.

As the game goes on, the level of bureaucracy spirals of out control, to the point where you're having to check and cross-reference armfuls of different documents, including ID cards, work visas, vaccination histories, and diplomatic passports. 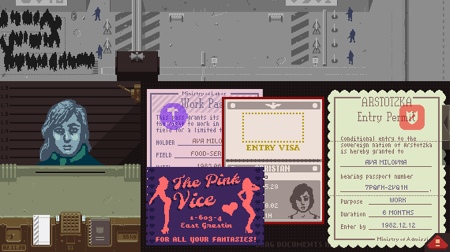 But you better be quick, as you earn money for each hopeful visitor that you process. You must then divvy up that salary at the end of the day. You need to pay rent, purchase food, buy heat, get medicine for sick family members, and more.

Papers, Please is a confronting game, in which you are faced with a lot of questions. Will you send away visitors with incorrect documents, or detain them for a little extra cash? Will you turn away a known sex trafficker and risk getting written up by your boss?

Pope also deals with some uncomfortable themes here, including pixel-art suicide bombers and virtual nudity. Would Apple ever allow it on iPad, where it has already stamped a big old "DENIED" label on games about sweatshops, illegal immigration, and drugs?

Pope tells Pocket Gamer that "the first move will be to put the game in the Mac App Store and see how it goes. If it makes it through that review, then I'll feel more confident about an iOS App Store approval". 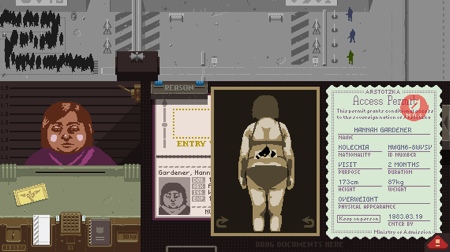 Whatever the case, don't expect the game on iOS or Android any time soon.

Pope says he will localise the game in a handful of languages and release a Linux version before even starting a mobile port.

Pope does say, though, that "some ideas are forming about how to handle the smaller screen, touch requirements, and other changes I'll need to make for tablets".

The Sundering has begun

How to be victorious in Heroes War - hints, tips, and tricks