Like Justin Bieber and Strictly Come Dancing, Minecraft has become a worldwide phenomenon.

There's now a yearly convention dedicated to this blocky 3D world builder, for one. There's also a range of Minecraft toys, a Lego Minecraft set, and - no surprises here - hundreds of companion apps for it.

Seriously: type 'Minecraft' into the App Store or Google Play, and prepare for a tidal wave of tie-in apps with Minecraft ringtones, Creeper papercraft models, guides, tips, seeds, skins, and everything else besides.

To help you find the diamond gems in the dirt blocks of the leading app stores, we downloaded a barrel load of tie-in apps for the PC version of Minecraft and put them through their paces.

These, then, are our favourite Minecraft companion apps. 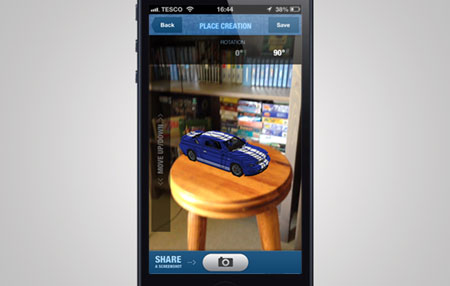 In Minecraft Reality, the dev takes your Minecraft creations and uses some augmented reality wizardry to make them appear in the real world.

It's easy enough to use (simply point your camera at a visually interesting patch of ground and wiggle your phone a bit), and the results look great. You can even save the creation to that specific geographical location so that other users with the app can replicate the scene (though I seriously doubt this has ever actually happened).

I only used the catalogue of built-in creations, in truth. That's because getting your own stuff into Minecraft Reality is a truly byzantine process. You need to make an .mca file (somehow), and submit it through a form (somewhere). I gave up after about five minutes of Googling.

It's definitely a cool little app, but it's maybe more of a one-use gimmick than its £1.49 price tag suggests. Ever wanted to play Minecraft while dressed up as Spider-Man? Or 'Gangnam Style' singer Psy? Or a panda? Of course you have. You're only human.

Thankfully, the Mojang-authorised Skin Studio enables you do just that. You can pick a skin from a huge range of player-made costumes, or make your own in the editor. This is very easy to use, but you'll still need a dollop of artistic talent and the patience of a monk to paint all four six-sided cubes.

Once you're done, simply email the file to your computer and upload it to the profile page on the Minecraft site. Or if you're handy with a pair of scissors and some Pritt Stick... 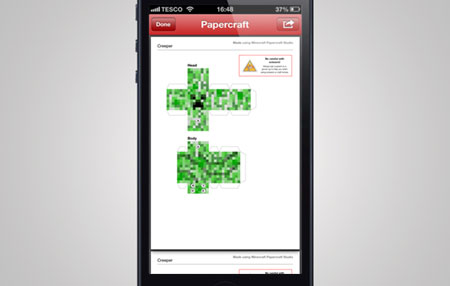 With this cute app, you can make real-world copies of Minecraft characters, mobs, blocks, and items. How? By printing out papercraft blueprints.

The process couldn't be more simple. You find a favourite item; print the file using AirPrint (or email a PDF file for later); and then whip out the glue and scissors.

The blocks and mobs come straight from the game, but there are loads of options for characters. You can choose one from the enormous catalogue of player-made designs, print your own skin (just enter your Minecraft player name), or import a design from Skin Studio (above).

Just like Skin Studio, this Mojang-approved app is polished and professional. So, if your Venn diagram of interests includes handmade models and Minecraft, you're in luck. It's cheap, and well worth the download.

Android users might want to check out Papercraft for Minecraft for a similar experience. 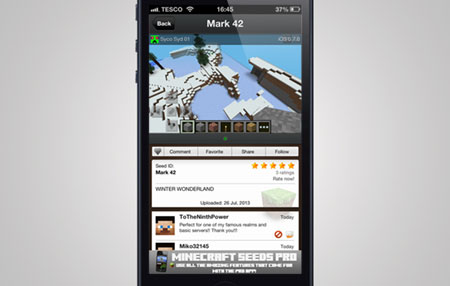 In the world of Minecraft, a "seed" is a string of text and numbers that the level generation algorithm can use to generate a specific terrain.

So, if you get the right seed, you could immediately be whisked away to a winter wonderland, or an incredible cave formation, or a world where diamonds are just metres from your feet. And this app (which is approved by Mojang, by the way) boasts a catalogue of hundreds.

Every seed has a description, comments, and screenshots (thumbing through seeds is like reading travel brochures. One has "huge overhangs and caves!" Another has "Five waterfalls!"). So, it's easy to find interesting new worlds in which to play. And there are seeds for Minecraft proper, Minecraft - Pocket Edition, and Minecraft: Xbox 360 Edition.

There are a bajillion websites from which to get Minecraft seeds, but this little app also does the job nicely. And while some features are exclusive to the paid version, the free app will do all the basics. A Minecraft must-have. 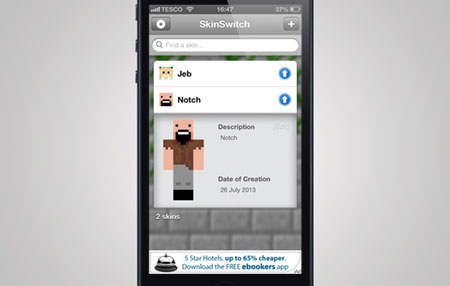 Changing your player character generally involves your having to load up the Minecraft website, log in, open the profile page, and replace your skin file. SkinSwitch is a simple but useful little app for automating that boring process.

You can use this app to keep a catalogue of skins, and then - provided you have entered your Minecraft login credentials - switch between them with the tap of a button.

Actually, getting skins into the app is easier said than done. You either need to borrow a skin from an existing player's profile, or have a custom-made PNG file that's already on the internet. So, if you made a skin in Skin Studio (above), you'll need to host it online.

A bit tricky to use, but ever-so-handy once you get the hang of it. 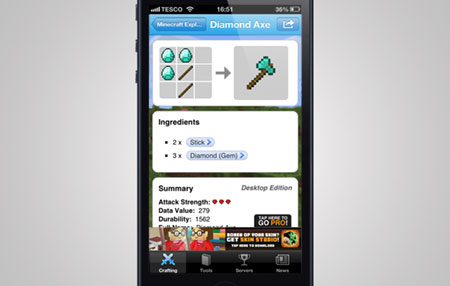 Minecraft Explorer is another app from 57Digital (creator of Skin Studio and Papercraft Studio), and the only Minecraft guide to be officially approved by Mojang.

The free edition contains a complete crafting guide and a server list for the Mac and PC edition. But if you go Pro, you'll get enchantment and seed guides; mob drop info; and content related to the Xbox 360 and mobile versions of Minecraft.

Think of it as The Hitchhiker's Guide to the (Slightly Cubic and Pixellated) Galaxy. A comprehensive tome covering all things Minecraft. No explorer can be without this one.

Android users might want to check out CleverBook. It's not as pretty as Minecraft Explorer, but it has almost all the same information and is free. 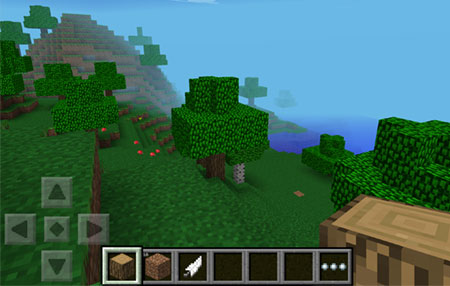 What do you do when you're hankering for some Minecraft action but you're nowhere near your computer or Xbox 360? Never fear: Minecraft Pocket Edition is here. Or there.

A few features from the PC version are missing here, sure, but this cut-down portable port does boast all the important stuff (mining, crafting, Creepers, giant randomly generated worlds, and even online multiplayer).

Plus, Mojang is constantly updating it with new features, edging it closer and closer to parity with Minecraft proper.

What did we miss? Tell us about your favourite Minecraft apps in the comments section below...