New releases round-up - Riptide GP 2, Bloodmasque, Prince of Persia: The Shadow and the Flame, and more

Every Thursday, we take time out to look at the week's new and noteworthy iOS games in both words and video.

But we've also delved a little deeper into the App Store, to find some games that aren't so beefy.

Like little puzzlers, fun platformers, a horrible free-to-play monstrosity, and a side-scrolling racer.

Let's take a look at this week's new games, then, shall we? Watch the video, then read on for prices, pretty pictures, and App Store links. 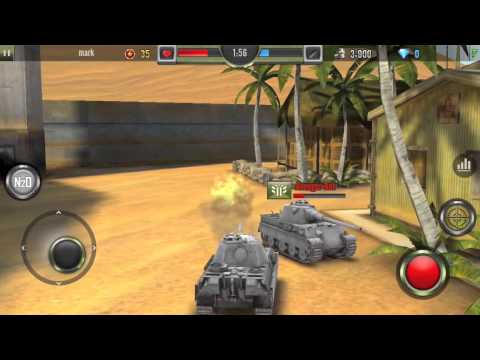 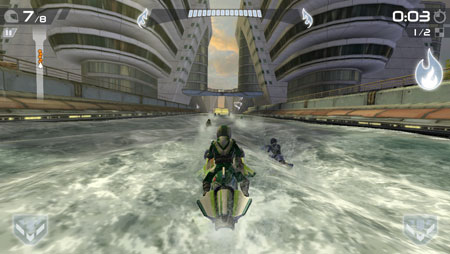 Vector Unit is back with a sequel to its wet and wild Wave Race-alike Riptide GP. This one is just as much fun to play as the original: the controls are spot on, the water physics are a thrill to wrestle with, and the trick system is engaging. Oh, and it looks gorgeous, too.

I did have some trouble with the upgrade system, as mentioned in my review. I felt like I was constantly unable to keep up with the competition until I upgraded my top speed or acceleration. But getting the money for those tune-ups requires grinding on older stages - or paying for in-app purchases.

When you're not slogging through previously played stages for extra money in Riptide GP 2, you can splash about in the full career mode or online multiplayer. So, if you don't mind a bit of a grind, go get it. It's a really fun mobile racer. 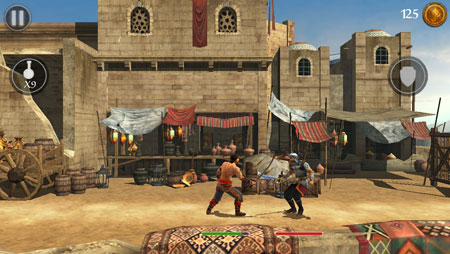 Prince of Persia: The Shadow and the Flame is a spiffy re-imagining of the ancient MS-DOS game of the same name. So, yeah, there are some lush 3D visuals and, erm, in-app purchases.

Ubi makes good use of touchscreen gestures for controls here, so running, jumping, fighting, sneaking, crawling, and climbing are all very easy to pull off. The game itself also looks very posh, is filled with secret stuff to find, and has speedruns for added replay value.

I've only scratched the surface of this one, but it's shaping up to be another high-quality Prince of Persia game, and I want to play more. So, I will. Back in a minute... 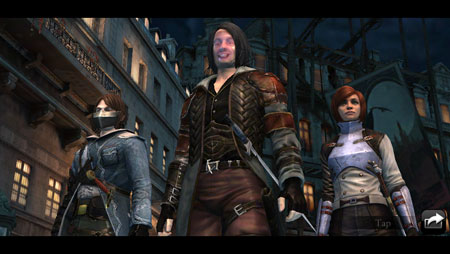 Square Enix's Bloodmasque is an Infinity Blade clone. In this world, however, you're fighting vampires instead of titans, Superman villains, giant robots, or giant sea monsters.

The usual explanation applies. You need to dodge enemy attacks so that you get an opportunity to execute counter-attacks. But unlike most Infinity Blade knock-offs, this one has full worlds for you to wander about in, side-quests, and nonsense cutscenes.

But the most ridiculous thing in Bloodmasque? You can use the front-facing camera on your iPhone to put your own gurning mug in the game. The main character's face will actually be replaced by your own stupid fizzog, and will, therefore, instantly eliminate any and all dramatic tension. 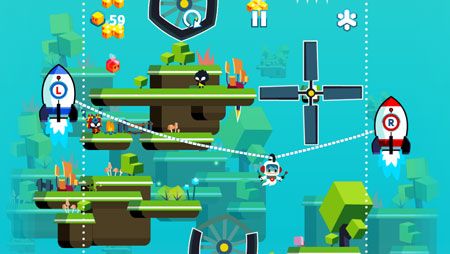 It blows my mind that developers are still coming up with inventive new touch-friendly controls for their iOS games.

The latest can be found in a charming little casual game called Sky Tourist. Here, astronaut hero Petey is dangling on a rope that's tied between two rocket ships. You can move the ships up and down with your thumbs, causing Petey to rise, fall, and slide left or right.

It's actually harder to control than it looks, and navigating these pastel-coloured landscapes - weaving in and out of cubelets; dodging spikes; and opening gates - can be surprisingly frantic. Always quite good fun, though.

Judging by the amount of it I've played so far, Sky Tourist isn't a particularly difficult game. Wait for our full review, mind, to see if it becomes more challenging. 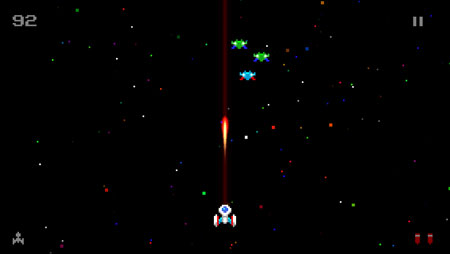 Chillaxian is a retro-inspired, neon-dipped shooter from Punch Quest co-developer Madgarden. It was made as part of the One Game A Month project. But seeing as creator Paul Pridham was seriously late with June's game, Chillaxian was made in a matter of days.

It doesn't show, mind. This is a polished little number, with a clever control scheme. You just jam on the left and right sides of the screen to make your ship move, and it auto-fires if a pixellated alien scumbag enters its field of vision.

Like the name suggests, this is not some teeth-grinding, hard-as-nails bullet-hell frustration-fest. It's slow, easy, and relaxing. If you want to zone out and kill some invaders, you could do worse. 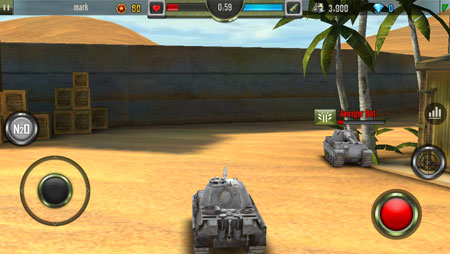 Iron Force is Chillingo's take on World of Tanks. So, it's an F2P tank combat game with a big online component.

The game's not very polished - the tracks on your tank don't move, for example - while the dev is one pushy son of a gun. Within two minutes of playing, I was already in the store and told to pay real money for the game's premium currency, diamonds.

I said, 'sod off', of course. But you'll soon notice that everything's locked away behind paywalls, you're asked to pay to respawn when you die, and there's an energy system with nagging push notifications.

I'm sorry. Call me a decrepit old dinosaur if you wish, but I simply can't understand why anyone would want to play a game in which you're invited to buy something every six seconds. 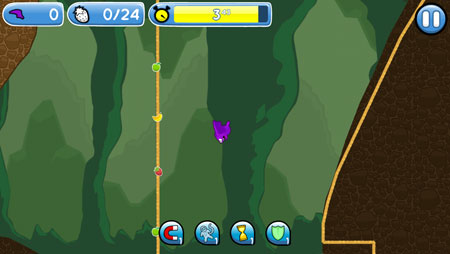 Bat Pack is a cute little casual game, where you guide a family of cave-dwelling Dracula-to-bes to safety. I guess these ones are fruit bats, because you'll need to chomp on bananas, oranges, and apples along the way.

The controls are simple: you make a small swipe in any direction to make the bat fly, so it's a case of making lots and lots of little swipes to guide him around the level. You have a surprising amount of control over the little guy.

Sadly, the level design is boring and repetitive. Might be one for kids. Older gamers should look elsewhere. 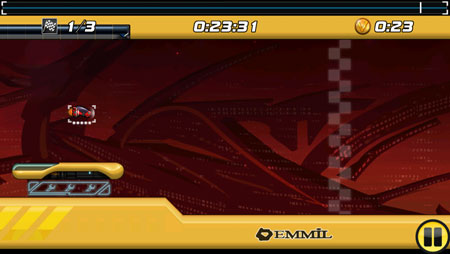 Delta-V Racing is 'WipEout: The Side-Scroller'. So, you've got floating cars, futuristic tracks, weapon pads, boost pads, a robotic announcer, and an EDM soundtrack. But this is WipEout as played in some parallel universe where someone accidentally lost the third dimension.

It's perfectly playable. It's essentially a side-scrolling shmup, and you have quite a lot of control over your ride. The game boasts quite a clever weapon system, too (to gain access to the later, more deadly power-ups, you must abstain from using weapons, and instead stack them together. A little risk vs reward for you.).

There's just not that much spark there. By sacrificing the third dimension, Spacehopper Studios has had to remove the breakneck speeds and explosive thrills. Basically, I can't see myself playing this instead of WipEout 2048 on Vita. Can you? 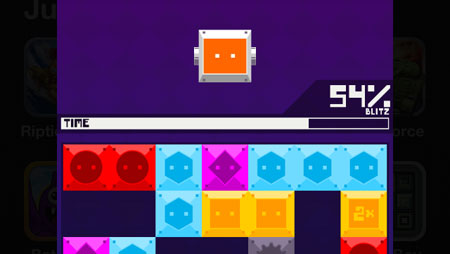 Block Block Robo is an insane and unpredictable match-three puzzler. It's fast paced, everything's changing constantly, and it's got an urgent high-tempo soundtrack. It has about a million different special blocks, and I don't understand half of them.

Annoyingly unresponsive controls aside, this looks rather good. Worthy of further investigation. 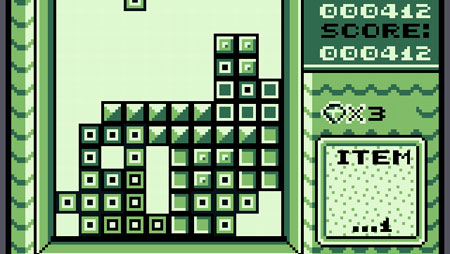 Tetris is perfect. The shapes, the speed, the music, the rules. There's a reason why this Russian import was the hottest handheld game of the '90s. So, why ruin it, Eo, with your likely litigious knock-off BlockBoy?

The pieces are weird and the special powers are just so odd. The Game Boy border and 50 shades of green graphics say "Tetris", but the wonky pieces say "lame iOS counterfeit".

The music is nice, though.