Squids and Squids Wild West developer The Game Bakers has updated its Streets of Rage-inspired "blast-from-the-past" arcade beat-em'-up Combo Crew with a heap of new content.

After downloading this update, you'll be able to gain access to Combo Crew's final chapter, and show evil antagonist Mr Boss who's the real big cheese for the very (probably) last time.

If your favourite brawler is Squids star Sammo, you'll be pleased to read that his powerful CanonBall combo move is now a Guardbreaker.

There are new character skins to unlock, fresh Game Center-powered leaderboards, and tons of almost obligatory bug fixes, too. 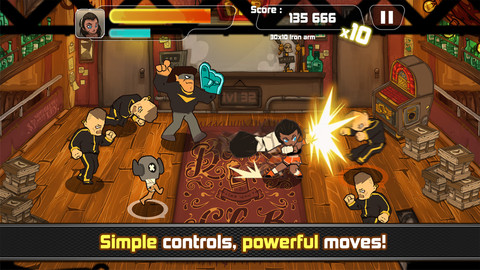 Combo Crew smashed its way through our review room back in May, and made off with a super shiny Silver Award in the process.

We called it a "frantic beat-'em-up that fuses a retro sensibility with modern touchscreen controls", and noted that it's an "an often brilliant, always entertaining way to punch some goons in the face".