Eidos-Montréal has updated Deus Ex: The Fall and removed the pesky anti-jailbreaking measure on which we reported late last week.

Before this update landed on the App Store, you see, you couldn't fire your weapon in Deus Ex: The Fall if you were playing the game on a jailbroken iPhone or iPad.

This update features a number of other improvements, too.

You'll now earn more XP rewards and credits for completing objectives and other tasks, for example. 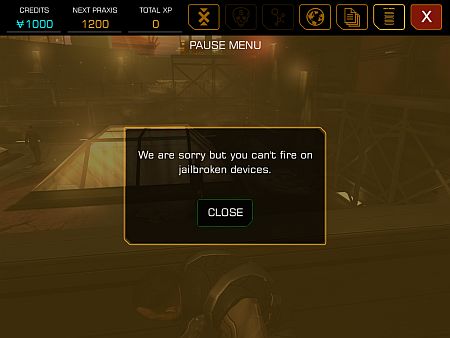 At review, we gave Deus Ex: The Fall a super shiny Silver Award. We called it an "ambitious, flawed, but ultimately entertaining FPS".

Deus Ex: The Fall is free on iPad and iPhone thanks to IGN's deal of the month