Out now in the US, Canada, and Australia

Black Gate: Inferno, a massively multiplayer online role-playing title from Contract Killer: Zombies publisher and free-to-play specialist Glu Games, is now available to download in the US, Canada, and Australia.

In Black Gate: Inferno, you choose a customisable hero from one of six different character classes, and set off on an adventure across a fantasy realm that's filled to the brim with open environments and plenty to do.

This is an MMORPG, so you don't have to play through it on your lonesome. You can create guilds with other players from around the world, if you like, and complete quests together with your friends.

Feeling a little anti-social? Fine. Spend all of your time competing against other players in real-time PvP battles, instead. 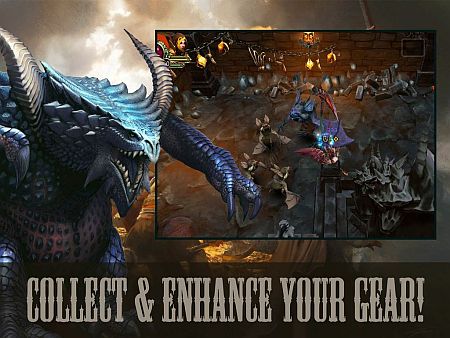 You can also excavate old ruins in search of glittering treasures, for example, take the reins of a chariot and compete in dangerous explosion-filled races.

If you just need to blow off a little steam or relieve some stress, you can take some time out and go on a monster killing spree.

If you live in the US, Canada, or Australia, you can download Black Gate: Inferno now. It'll be launched globally later this year.

You can't fire your weapon in Deus Ex: The Fall if you have a jailbroken iPhone or iPad