This is not the first time Nokia has used its innovative 41-megapixel sensor on a phone, but the less said about the 808 PureView the better.

The latest model is the Lumia 1020, announced today in New York City.

Instead of being found on a phone running an obsolete operating system, though, Nokia has been able to use the knowledge and feedback from its first outing to tweak things for its Windows Phone debut.

The oversized image sensor makes it possible to take zoomed photos and video, without losing quality, while grabbing even better shots in low-light. 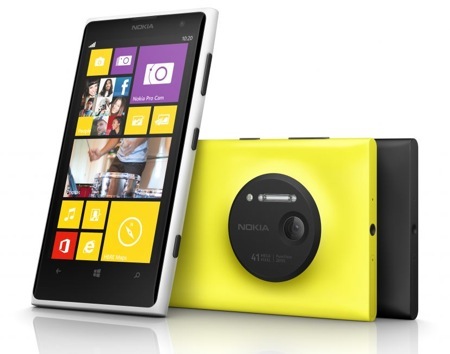 As well as saving photos of up to 38-megapixels, the 41 million pixels are oversampled to produce a higher-quality 5-megapixel image.

And if you're wondering about the zooming ability, the Lumia captures the full data and allows you to zoom in and out afterwards, without image loss. Nokia Pro Camera makes all of this easy to control, including a range of advanced options for keen photographers.

In addition, the Lumia 1020 now uses this oversampling to cover HD video recording too.

The camera has an all-new Optical Image Stabilisation system, six lenses, Xenon flash, LED for video, and comes with the range of smart camera functions seen on the Lumia 925. 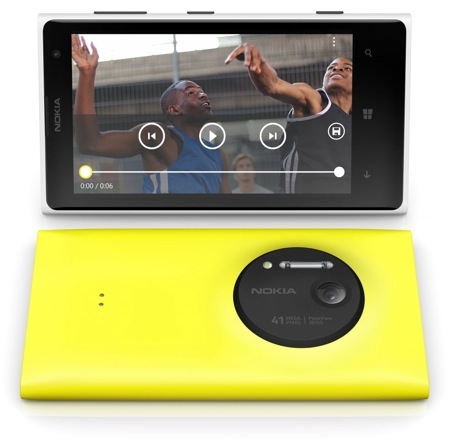 Flip over for the phone

Nokia is suggesting the back of the camera, sporting this new camera tech, is the new front. But let's not forget that there's also a phone inside this beast too.

The Lumia 1020 has a 4.5-inch, 768x1280 pixel, touchscreen display with Corning Gorilla Glass 3, PureMotion HD+ ClearBlack technology (with sunlight readability) and super sensitive touch for control with fingernails and gloves.

There's also a 1.5GHz dual-core processor, 2GB of RAM and 32GB of internal storage (but still no memory card slot).

Unlike the metal trimmed Lumia 925, the 1020 retains a polycarbonate-clad unibody shell, and this means you'll be able to get the phone in black, white, or a very bright yellow.

One concern was learning about a rather paltry 2,000mAh battery, as well as the integrated Qi wireless charging ability taken outside of the phone, meaning - like the 925 - you'll now need to add a separate clamshell cover to add this feature.

But then Nokia surprised us with an optional camera grip, including a universal tripod-mount, and a second battery to further boost your usage time.

In the USA there will be an exclusive release on AT&T that sees the device shipping from July 26th for $299.99, with devices shipping in Europe in Q3.

Phones 4u, Three, and O2 have so far confirmed the Lumia 1020 is coming to the UK. We will keep you updated as and when the other networks confirm the release.