The mushy 2D sprites of Mario and Luigi wander about Pi'illo Island, using cooperative manoeuvres like spinning each other around to mimic a helicopter or bopping each other on the head with a hammer to overcome obstacles.

And when they run into an enemy, this kicks off a turn-based RPG battle. Mario and Luigi can attack independently - by jumping or swinging a hammer - or together, and good timing can cause extra damage or help you avoid incoming attacks. 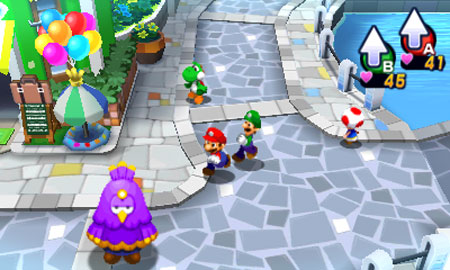 So it doesn't stray far from the formula set up by this delectable GBA and DS series of funny, imaginative, and massive RPG adventures.

But then Luigi finds a pillow, lays down, dozes off, and begins to dream. Here's where things get weird.

For one, the game turns into a side-scrolling platformer instead of a top-down RPG. You'll still enter a turn-based battle whenever you bonk an enemy on the head, but the dream world offers some changes here, too. 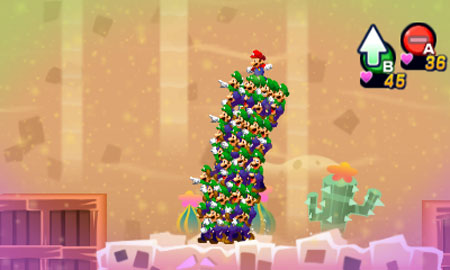 In this bizarre world, the cooperative bros attacks take a turn for the surreal. In one, you roll a giant ball of Luigis, through a crowd of more Luigis, hoping to scoop them up, Katamari Damacy style. Then, you'll steamroll all your foes with this ball o' plumbers.

Or, you might stack up a human tower of Luigis, being careful not to let the whole tower topple before you manage to stomp on a single foe.

In other sections, it all goes a bit Inception as events in the real world can affect the dream universe. 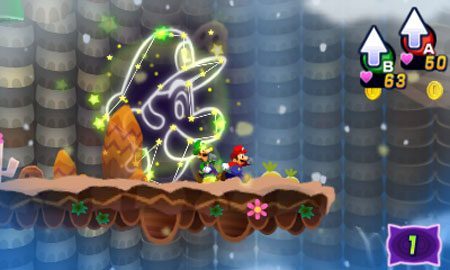 You'll see the slumbering younger bother on the bottom screen, and at specific times in your journey - when Luigi has manifested inside the dream as a totem pole or a flower or the sun - you can fiddle with his face to affect the dream world up top.

That might mean tweaking Luigi's moustache in the real world to manipulate a pair of 'tache-like leaves in dream land, which can pick up and propel Mario about the level. You could make Luigi sneeze, or make him feel hot or cold, each of which actions affects the environment in its own way.

Finally, in the dreamy boss battles, you'll play as a 50-foot-tall Luigi, with a tiny Mario sat on his hat. You'll also twist your 3DS sideways, turning the game into an impromptu beat-'em-up, with Luigi and the villain taking up an entire screen each. 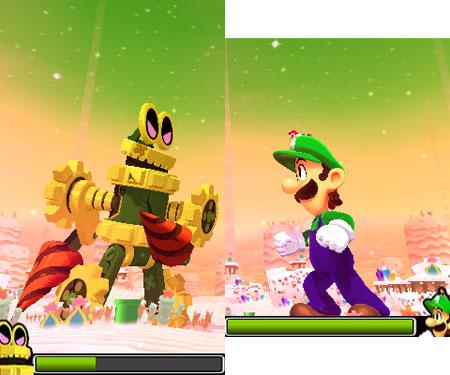 It looks outstanding, with each character having bold and detailed models done up in a dreamy, painterly style. These are also some of the most engrossing and dynamic boss battles of the series, as everything (from defending to healing) is a tense rhythm-drive mini-game.

Mario & Luigi: Dream Team Bros is shaping up to be every bit as clever and creative as its predecessors, and retains the sharp writing and gorgeous visuals. We can't wait to play more - and, hey, we don't have to wait long.

Christmas in January - pick up the Mario & Luigi: Dream Team XL bundle for $150 at Walmart