Second-screen experiences in Xbox One and PS4 games look set to become the norm.

Don't believe me? Check out this list of recently announced next-gen titles that will offer second-screen experiences via a smartphone or tablet.

One of the games on that list is Dead Rising 3, Capcom Vancouver's upcoming open-world survival-horror game for Xbox One.

Rather handily, Dead Rising 3 executive producer Josh Bridge took time out of his busy schedule to speak to Siliconera about integrating a second-screen experience into Capcom Vancouver's ambitious next-gen game. 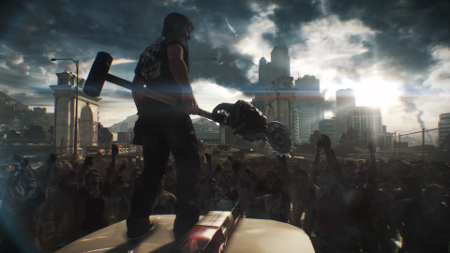 Bridge explained how players using a phone or tablet connected to their Xbox One via Microsoft's Xbox SmartGlass app will get access to some exclusive content.

"After you launch the app, it notices that Dead Rising is currently being played, press a button, and in kicks our phone. It actually skins your phone to be like the phone from the game's universe.

The Dead Rising 3 story will still make sense even if you don't have an Xbox SmartGlass-compatible device to hand. Oh, and you'll still be able to finish the game without the extra Xbox SmartGlass content.

As a side note, you'll be able to customise the ringtones you hear when this Xbox SmartGlass-exclusive character calls to give you missions. Which is nice.

Dead Rising 3 will be released on Xbox One in November 2013. Hopefully, the Xbox SmartGlass content will be available from the word go.