E3 2013: Media Molecule's Rex Crowle walks us through the first levels of Tearaway

Since its unveiling at Gamescom last year, Tearaway's ranked as one of our most anticipated PS Vita games - and with good reason.

The adventure/platformer from the creative minds behind LittleBigPlanet lures you in with its quirky artwork and it looks like a complete gem of a game.

We went hands-on with it back in January, but at E3 2013 Tearaway's lead designer Rex Crowle walked us through the first 20 minutes or so of the early levels.

From the outset, Crowle said that his team was "playing with breaking the fourth wall in as many ways as we can." In terms of the gameplay, this translates to a heavy reliance on the Vita's front-facing camera and suite of inputs to help pull you, the player, into the game.

I was skeptical of the effect at first as it seemed nothing short of gimmicky - I don't have a particularly pretty face, and I wasn't sure I'd like it splashed over walls of the game environment or staring down at me from the wounded sun at the heart of Tearaway's story.

But in practice, the effect that this achieves is tremendous. You, the player, become an integral part of the game, and Iota/Atoi (Tearaway's mute protagonists) come to rely on you for help.

This divine intervention manifests as drumming on the Vita's rear touchpad to launch the lovable, envelope-headed characters skyward, but during the times that Iota/Atoi are confronted by enemies it'll be up to you to poke a finger into the game to chase the baddies away.

The player involvement goes deeper, however, as you'll need to manipulate the environment around Iota/Atoi to help them clear certain obstacles.

Shiny tabs of paper let you know what pieces of the world can be moved or otherwise altered (with a pinch-and-zoom technique that readers of this site are probably familiar with), and doing this will reward you with a shower of confetti - Tearaway's currency that's used to unlock hidden artwork and features.

What amazed me the most about Tearaway's world was how positively compelling it is to see it in action.

Almost nothing is static, and gentle breezes will alter the texture of paper pathways, walls, and features. As you run through a forest, giant mushrooms will sway in the direction of the PS Vita's control sticks, perfectly mimicking your gestures and once again pulling you into the game.

Adding to the gorgeous visuals is a folk-infused soundtrack with distinctly modern touches. Crowle explained that the music should feel like "it's coming from the soil of the game" and that it's supposed to sound as if it was being played by the characters you encounter.

Unlike LittleBigPlanet, which used some licensed music, Tearaway will feature a completely original score - and from what I heard of it, the soundtrack pre-order definitely sounds like the way to go.

Echoing Kristan's sentiment during his hands-on, Tearaway is shaping up to be the PS Vita's first true system seller. 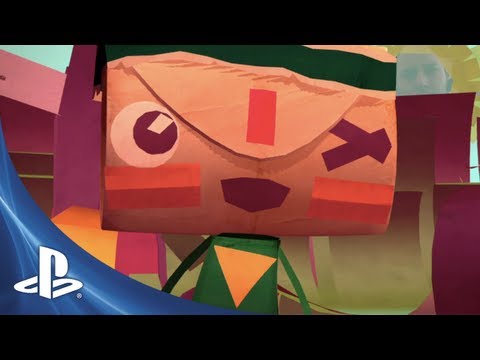