How to crush your rivals in Battle Nations - hints, tips, and tricks

War! Huh! What is it good for? Find out with our handy guide

Well, not all the time.

I mean, in video game form it's often rather enjoyable. Shooting up baddies with bloomin' great cannons and outsmarting your enemy with cunning tactics can be ruddy fun.

Far from being hellish is Z2's delightful, humour-packed, and downright smashing Battle Nations. That's why it was my utmost pleasure to dive back into this game to create a beginner's guide for you.

So, read on for tips on how to win battles, maintain efficiency in your base camp, and to rack up those all-important experience points. Ten-hut!

Get rid of the ZZZs 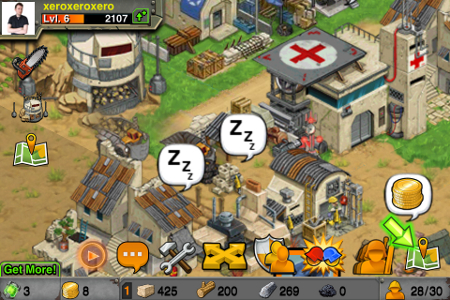 In terms of building up your base, it's a good idea to ensure that there's a healthy amount of work being carried out by your citizens.

Each building that's not in use will have a symbol over it with 'ZZZ' written inside - you should avoid having any of these if at all possible. Since the game continues without your necessarily being present (and therefore the construction of items takes place even if you're not playing), time not spent tweaking layouts and battling enemies is time that can be spent making useful materials.

You'll often need specific types of item to complete story missions - Lemon Cookies from the Bakery is an early example - so getting your best bun merchants on the case as soon as possible is essential. You should also train new troops in your downtime to ensure a healthy supply of cannon fodder.

You should be upgrading your buildings as much as possible, and progressing through the missions to unlock more and more content to expand and improve your base of operations.

As you make improvements to the facilities you have, though, don't forget to clear the area of raiding forces so that you rack up more experience, more resources, and avoid any penalties that might be incurred for not doing so. 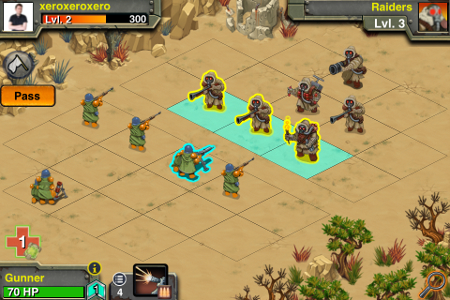 Though nowhere near as complicated as the near-limitless tactical possibilities of chess, battles that you take part in here are complex beasts. You should, therefore, definitely be thinking tactically about any and all battles you take part in.

Considering the next move of your opponent is vital, especially against the comparatively straightforward AI in the single-player component of the game.

For example: just like you, individual enemy troops can't fire every turn. So, if you're down to the last few (weakened) soldiers, pick off ones that haven't fired recently.

By doing this, you'll likely force the enemy to pass on its turn while it's reloading its weapon. This means you essentially get a free turn, and save your military from taking damage.

Reducing damage is something you always keep in mind, by the way, for you'll have to heal troops if they take too many hits. This is a long process and keeps your fighters in the hospital rather than on the battlefield.

If you're really canny, you'll put inexpensive "pawn" troops towards the front of your attack to ensure they soak up damage before your more valuable charges are weakened. 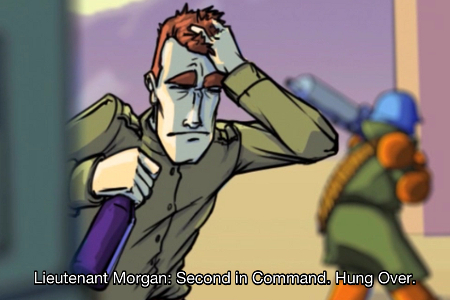 - As with all games of this sort, you should return as frequently as possible to the game to get the very most out of your time invested. If a process only takes a few minutes to execute, jump back in so that you can start another, more lengthy one before you log off for a longer period of time.

- On the subject of time, you are afforded a short amount of time in multiplayer matches to respond to moves from your opponent. By not responding, you will forfeit the match. Think carefully about your manoeuvres, then, but don't hang about for too long.

You'll want to complete these battles quickly, too, for you'll be able to exchange tokens for prizes if you win enough multiplayer scraps.

- If you don't think you're quite ready to take on the world, though, there are spaces where you can also engage in random battles with low-level enemies to gradually build up your troops' experience. This can prove to be an effective way of giving them practice without endangering their lives. To get grinding, just tap on the map with the pin on it and then on the Boar Badlands.