The game arriving at Platform Android is pretty good

It's been a long time coming. A helluva long time.

But after a series of delays that make the British rail system look punctual, Days of Wonder's Gold Award-winning boardgame adaptation Ticket to Ride is finally ready to 'board' your Android tablets and smartphones.

You will need to own a 'droid device that's running Android 4.0.3 or higher for the game to actually work, but beggars can't be choosers.

If you're not familiar with Ticket to Ride, it's a game about building a railway, picking up passengers, and blocking off your opponent. You'll draw cards, lay down track, and try and find the most profitable routes.

The Android version includes a single-player mode and online competition on the classic USA map that was included in the original multi-million-selling physical boardgame. You can also buy digital expansion packs via IAP to get the Asia, Europe, Switzerland, and USA 1910 maps. 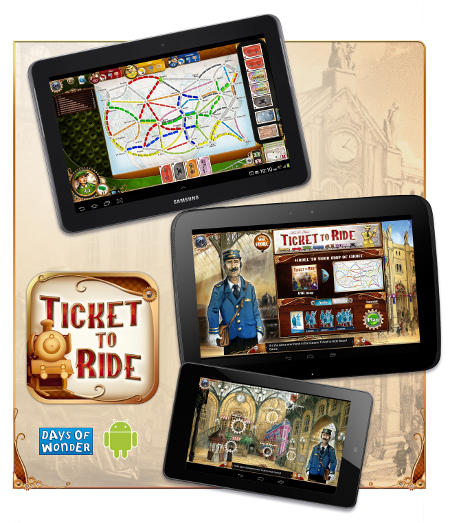 Ticket to Ride boasts cross-platform multiplayer, meaning you can face off against friends and foes on iPad, iPhone, PC, or Days of Wonder's online portal.

If you prefer playing against computer-generated opponents, there are four distinct AI personalities for you to face off against in Ticket to Ride.

In our review of the iOS version of Ticket to Ride, we described it as "a fantastic adaptation of an excellent boardgame, and a must-buy for strategy fans."

If that sounds like the sort of thing that's right up your train track, you can buy Ticket to Ride for Android from the Google Play Store right this second for $6.99.

Want more? Check out our 14 other Ticket to Ride news stories!

This week on the PS Vita Store: Limbo, Rayman Origins, and Cardboard Castle

Missed our Ticket to Ride stream last night? Well you can catch up right here

This is your one hour warning! We're going live with Ticket to Ride on Twitch so soon