Pizza vs. Skeletons devs on what you can expect from The Executive

After seeing a teaser for Riverman Media's upcoming fighter The Executive, we simply had to know more about the game.

It had sharp suits, it had werewolves, it had men in sharp suits fighting werewolves and kicking through walls - in short, it's everything you'd expect from the follow-up to the Pocket Gamer Gold Award-winner Pizza vs. Skeletons.

We caught up with Riverman's Jacob Stevens over the weekend to chat about what you can expect from The Executive.

Pocket Gamer: Let's start with the basics - what sort of game is The Executive? Jacob Stevens: The Executive is a martial arts action game that pits a CEO against a pack of werewolves that have infiltrated his company.

It will seamlessly combine a deep, multi-layered combat system with playable over-the-top stunt sequences. The action will take place against the backdrop of an enormous metropolis, taking the player from the rooftops of skyscrapers to the depths of the underground subway system.

The Executive is not purely a fighting game, brawler, endless runner, or rhythm game, but it will combine elements from each into a unique experience. We've worked over a year to design an intuitive touch-based control system that allows the player perform amazing fighting moves and stunts intuitively. 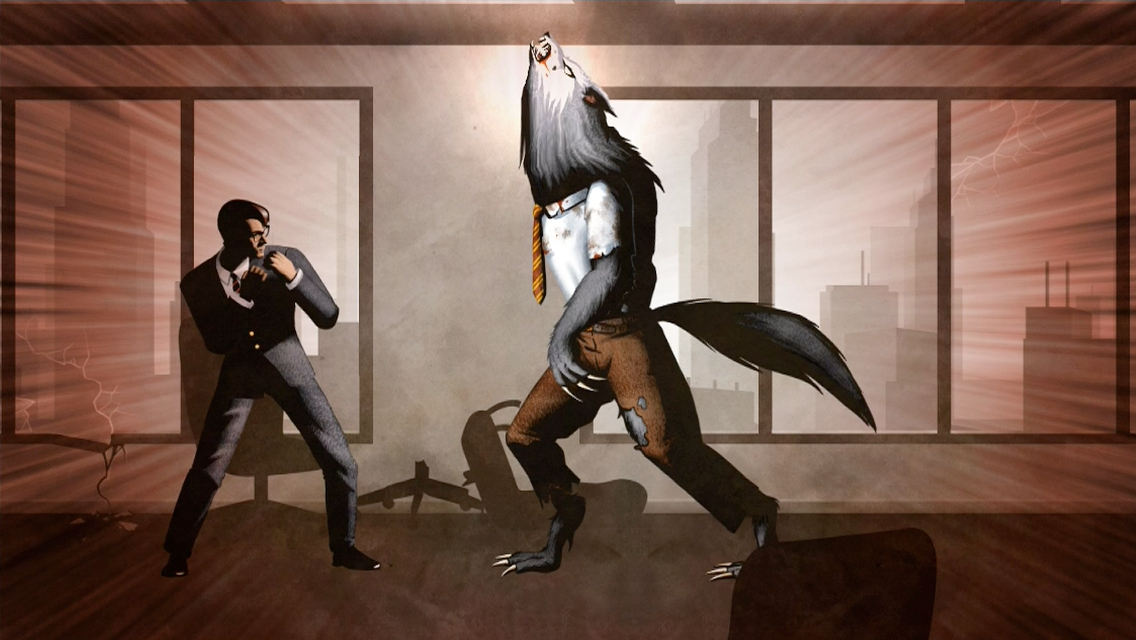 What inspired you to create The Executive?

After Pizza vs. Skeletons launched, Paul (Riverman Media's co-founder and my brother) came to me with the idea of making a game with the tone and tempo of a fast-paced martial arts movie.

We're huge fans of Jackie Chan's Rumble in the Bronx and Bruce Lee's Enter the Dragon but we feel like video games have not yet managed to capture the essence of those movies.

No interactive game has really accomplished that yet, though. With The Executive we're taking on the challenge of implementing fighting and stunts into a seamless gameplay experience.

Will fans of Pizza vs. Skeletons like The Executive, or are you aiming at a different audience?

Our objective is to build games for players that love games and want new experiences. In that sense, our intended audience hasn't changed.

However, there will certainly be differences between the two games. In The Executive you are going to get a touch of the over-the-top ridiculousness that was in Pizza vs. Skeletons, but without quite as much of the wackiness and randomness.

Also, instead of introducing variety in the form of multiple gameplay styles, The Executive will have one core gameplay style. We'll keep this fresh throughout the game using a multi-layered combat system, different types of enemies and environments, and tons of hand-crafted action sequences.

To the original question though, yes, I think if you liked Pizza vs. Skeletons you'll like The Executive even more! 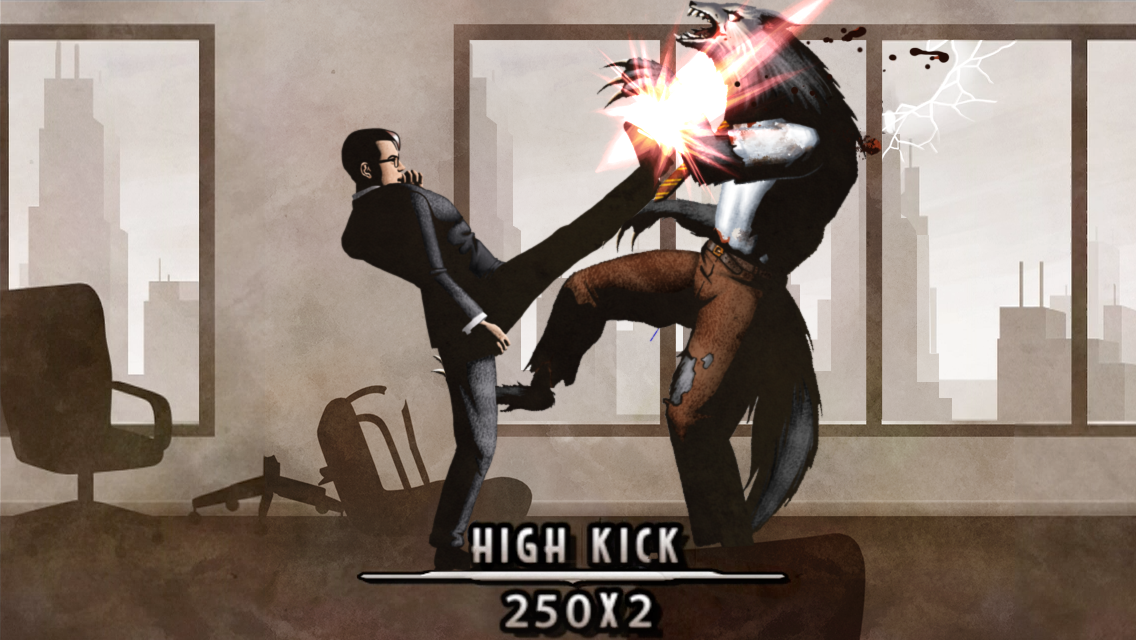 Do you plan to release The Executive as a premium or freemium title?

Riverman Media has made a firm commitment to our players not to use freemium monetization models so The Executive will be a one-time paid download.

All content, including all updates, will be free once the original purchase has been made.

We don't have a problem with developers making lots of money - that's the goal of every business! - but the problem with freemium is that it infiltrates the design of a game, making it less fun, in order to shoehorn in more in-app purchase opportunities.

We strongly believe that a traditional paid model allows us to deliver the best gaming experience to our players. in other words, games should make money because they are awesome!

The artwork and animation are both quite attention grabbing. How did you decide on the artistic style for The Executive?

We spend several months at the start of every project developing a new visual style for each game. As a company devoted to 2D, we work with both digital tools and traditional painting mediums to create an art production pipeline.

For example, we hand-painted and scanned several dozen sheets of watercolor washes that are layered on the characters and backgrounds to give them depth and grittiness. The style itself was originally inspired by early 1960s era magazine ads, and then evolved in a new direction alongside the gameplay.

In terms of animation, we are using a proprietary system that we've been developing for four years. It allows us to take hand-drawn frames of sprite animation and blend them together totally smoothly.

Put another way, the 2D animations in our games no longer have "frames". I believe this is a first for hand-drawn 2D game art. We also use this system for special effects, such as humans transforming into wolves. 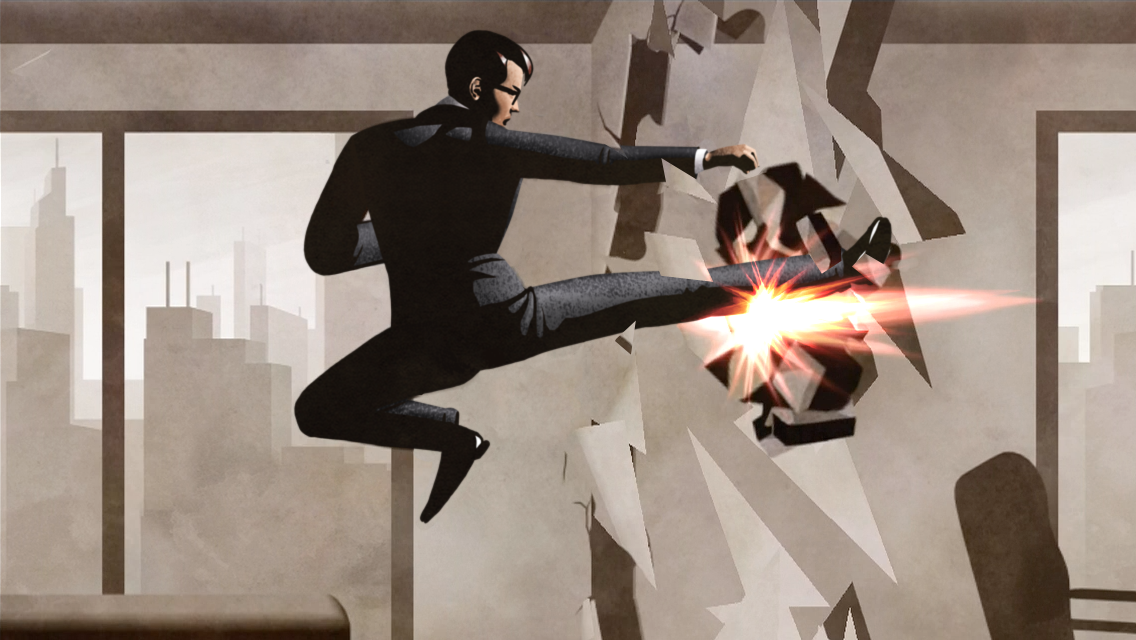 How do you think The Executive will stand out from other games on the App Store?

I can say with confidence that the sights and sounds of The Executive will be completely unique amongst other game in the iOS library.

From the response we've gotten to the game's announcement, a werewolf-battling CEO is different enough as it is. Believe it or not though, we purposefully kept the first video "tame" in comparison to what we intend to put in the rest of the game.

Werewolves in an office are only the tip of the iceberg...

Is the music that we heard in the trailer from the soundtrack?

I wrote the piece you heard in the trailer specifically to synchronize with the timing of the action in that video clip. Therefore it's unlikely that this specific music will make it into the game.

However, many of the stylistic elements will appear in the final soundtrack. If you can envision Michael Jackson's Thriller, Philip Glass, and System of a Down rolled into one, that's what we're aiming for with the musical style. In other words: dark, hypnotic, pounding action music with a groove.

Want more? Check out our growing collection of The Executive articles!

If Afterland's Kickstarter is successful, Magic: The Gathering will meet Tim Burton in all the right ways

The Executive - An awful lot of silly arcade fun

The Executive is a deep, if repetitive, beastie brawler