Unravel the mystery of a stolen crucifix from June 6th in Runaway: A Road Adventure for iOS

Always on the run

Developer Pendulo Studios and publisher Bulkypix have just announced that their 2D point-and-click adventure Runaway: A Road Adventure is heading to the iPhone and iPad on June 6th.

As you may (or may not) already know, Runaway: A Road Adventure is a prequel to Runaway: A Twist of Fate and Hidden Runaway, both of which are already available to download from the App Store.

In A Road Adventure, you have to aid franchise regulars Gina and Brian in their attempts to outsmart and outmanoeuvre thick-headed thugs, desert-stranded drag queens, hippie hipsters, and Hopi Indians en route to unravelling the mystery of a stolen crucifix.

Runaway: A Road Adventure features tons of puzzles for you to solve, more than 100 environments for you to explore, and no fewer than 30 characters for you to interact with. 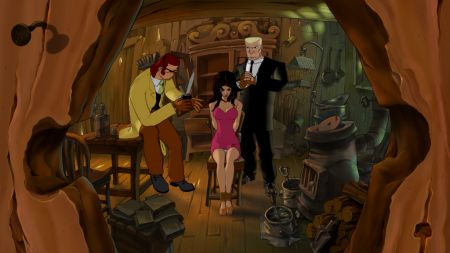 Runaway: A Twist of Fate nabbed a rather disappointing 4/10 when it passed through our review room in March. Unfortunately, Hidden Runaway fared only slightly better, picking up a 6/10 from our Harry.

Still, we have high hopes for A Road Adventure, which kick-started the Runaway franchise back in the forgotten days of 2001.

LG confirms white Nexus 4, but rules out any further Nexus partnership with Google

Out at midnight: Pendulo goes back to its roots with franchise pioneer Runaway: A Road Adventure