Barnes & Noble entered the tablet market hoping to take on Amazon and Google with low-cost tablets of its own, but - despite impressive hardware and features - it didn't really get anywhere.

Its 7-inch Nook HD had a higher-resolution display, multiple user support, and memory expansion over Google's Nexus 7, but it was still Google that enjoyed all the sales last Christmas.

A big problem for Barnes & Noble, and indeed its rival Amazon, was that simply using Android isn't enough. Consumers crave content, and that's where Google wins. 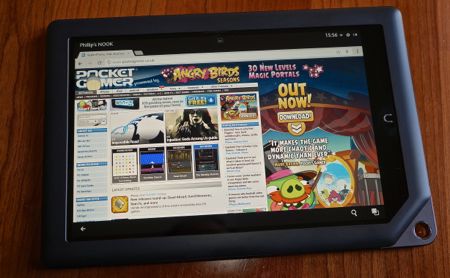 However carefully curated the store is, however intelligently it might learn your likes and recommend more relevant content, without access to the full range of apps on Google Play it's on a hiding to nothing.

Amazon is now in a similar predicament, but Barnes & Noble has taken the brave step of bringing all of the Google apps and services to its tablets. 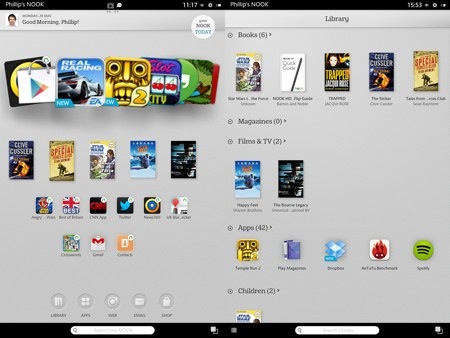 Suddenly the HD and HD+ look even better value than Google's own Nexus devices, but are they the bargain they appear to be - and, in particular, is the flagship 9-inch HD+?

First of all, that hook on the corner. You can't miss it, but nor can you understand it. Is it a place to attach your carabiner clip for your next mountain climb, perhaps? 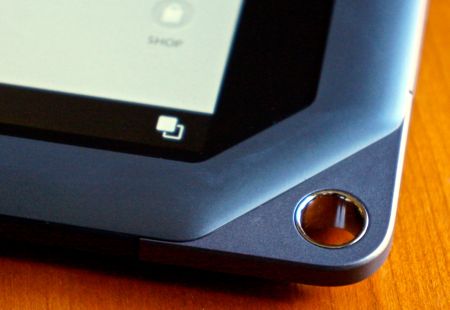 What it does do is show you whether you have the tablet the right way around, although the small 'n' button (the home key) does a perfectly good job too.

Despite running on Android, the user interface has its own look. Notifications are shown by tapping at the middle of the status bar, while other key information and shortcuts are viewed from the top right instead of at the bottom.

Tapping for notifications can be easier than dragging down a bar, while the textured background and sharp fonts (looking like printed text on paper) make the user interface look fresher than a normal Android tablet's. Of course, Barnes & Noble came at this as a company building eReaders, but the HD+ can now run anything that another Android tablet can. 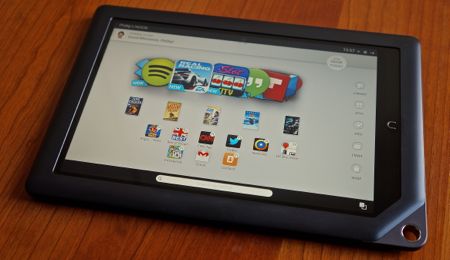 Google has since added user profiles to Android tablets, but in a rather haphazard way that sees loads of memory eaten up and, if the Nexus 7 is anything to go by, introduces incredible lagging that will soon have you reverting to single-user status.

The HD+ manages users with ease, meaning it can easily be shared among a family. Adults can elect what apps and content will be available to their children, and user-switching is as quick and easy as dragging an avatar into the centre of the lock screen.

Google decided that a front-facing camera for video calling was sufficient on the Nexus 7, but Barnes & Noble hasn't even bothered with that. So forget about taking photos or any face-to-face Skype chats with the grandparents that moved to Australia. 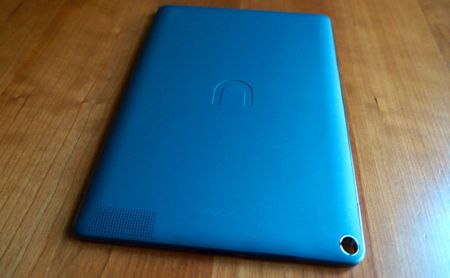 With a full-HD display, the HD+ has the same resolution screen as Sony's new Xperia Tablet Z. However, the more powerful Sony isn't selling for £180 or £200 (for the 16 and 32GB models respectively.)

In terms of performance, the HD+ has to make do with a 1.5GHz dual-core TI OMAP processor with a PowerVR SGX544 GPU. 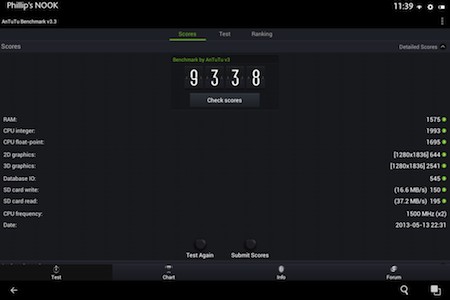 In other words, where it matters the HD+ can hold its own against more powerful rivals - while totally obliterating them in terms of value for money.

Besides the high-definition display, a very nice adaptation of Android, and switchable users, a big benefit of the HD+ is its very impressive battery life.

In standby mode - a state that many tablets will find themselves in for long periods of time - the HD+ can easily last for a week or two between charges.

A further power-saving mode can squeeze even more life out of the battery. By way of illustration, our review device is still on 55 percent charge after more than 13 days.

Of course, if you use the Nook HD+ more intensively you can expect to charge it every few days, but you certainly won't be disappointed with the battery in this tablet.

Another bonus is that each HD+ also has a memory card slot, letting you add extra media for your offline enjoyment.

Besides a design that might not win many fans, the Nook HD+'s biggest problem is its use of a proprietary connector. This is a huge mistake now that just about every manufacturer has agreed on a standard micro-USB connector. 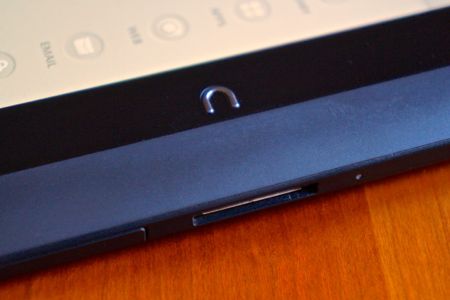 Non-standard charger will cause headaches, especially when travelling

You can't even charge via most USB hubs or computers, having to use the higher-powered mains adapter to provide enough amps to charge.

This also means you'll need to buy a non-standard connector to hook the HD+ up to a TV.

Besides the lack of a common micro-USB port, there's little to dislike about the HD+. At its current price, it's more a case of deciding whether to shell out the extra £20 to get double the storage (answer: it is).

It's unclear what this capitulation to Google, and the huge price cut, will mean for the prospects of seeing any more Barnes & Noble-made tablets in the future, but that's for the shareholders to worry about. We recommend that you pick up a Nook HD+ while you can.

A sub-£200 9-inch tablet, with HD graphics and exceptional battery life. The previous issue of limited software has been eradicated with the addition of Google Play, so bag one while you can
By Jonathan Morris
| May 24, 2013 |
Android