There can now be absolutely no doubt that the much-rumoured Samsung Galaxy S4 Active exists.

Why? Well, because there's a bloomin' great video of it in action over on MobileTechReview's YouTube channel.

You see, a "friend" of the MobileTechReview site obtained a pre-production handset and promptly took photos of this ruggedised version of the Galaxy S4. As you would.

'Majita' then shot a short video of the as-yet-unconfirmed Galaxy S4 Active, proving the phone is very much the real deal.

In the 41-second video (posted below), you can see that the Galaxy S4 Active has three physical buttons on the front and a screwed-on rear cover (to make it dust resistant and waterproof). 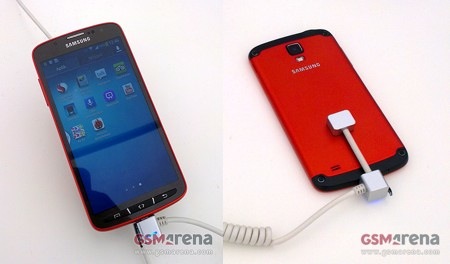 This super-durable blower sports the same 5-inch full-HD (1080x1920) screen as the flagship Galaxy S4. There does seem to be some uncertainty over how powerful the S4 Active might be, mind.

While Majita reports that the Galaxy S4 Active will be powered by a dual-core Snapdragon S4 Plus chipset, GSMArena reckons it will have a 1.9GHz quad-core Snapdragon 600 chip under its hood.

What everyone does seem to agree on is that the 13-megapixel snapper on the flagship S4 has been replaced with a more conservative 8-megapixel one for the Galaxy S4 Active.