Well, you're in luck, because Rovio has bundled the iconic images of numerous yearly hols - from Halloween to Christmas - into bonus batches of Angry Birds levels. It's called Angry Birds Seasons.

In the latest update to this game, Rovio ditches the seasonal celebrations and holiday-themed level packs in favour of something completely fresh. This time, you see, we're at the circus, and the levels are based on magic and illusions.

The Abra-Ca-Bacon update contains 36 new stages, most of which feature portals. These wormholes stitch together two places in space and time. So, whatever enters one immediately pops out the other.

You can use this to get the drop on entrenched piggies, sneak through shortcuts, and make bits of scenery rain down on the pigs' heads.

If you're stuck on a particularly tough stage, just watch the pros in action at the links below (more to come).

Plus, check out the following videos for the four bonus levels. Bonus 1 (Get 30 stars in Abra-Ca-Bacon)

There's only one Golden Egg to hunt down in Abra-Ca-Bacon, and it's pretty easy to spot.

Once it's yours, an egg will appear on the screen to the right of this season's level list. Tap it to play a fun bonus level. 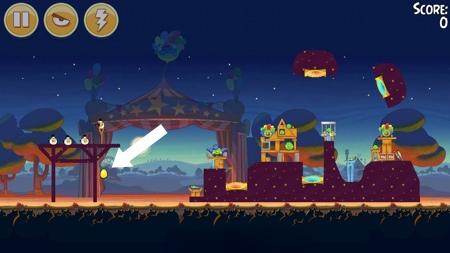 This Golden Egg may be out in the open for all to see, but actually collecting it is no easy task. You'll need some deft use of the portals (and a little luck) to get it.

Use your first white bird to clear some of the wooden structure near the middle of the stage. Then, fire a white bird to the central point, and drop an egg in the bottom blue portal. With any luck, the bird will fire itself into the other blue portal.

Now, here's where luck comes in. The bird should pop through the bottom portal and do a header on the egg. This will bounce the egg up and cause it to fly over to the Golden Egg. The white will explode, taking out the golden one in the process.

If you miss, try again until you get a lucky hit.

Here's a video showing you how to get the Golden Egg and beat the bonus level it unlocks. 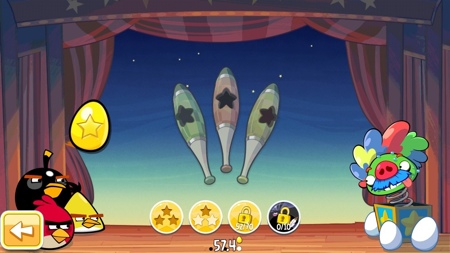 To get this Golden Egg, you'll need to earn three stars on all stages in the Abra-Ca-Bacon theme for Angry Birds Seasons. Good luck!

Here's a video showing you how to beat the bonus level this Golden Egg unlocks.