Disney has just updated its Silver Award-winning physics-based puzzler Where's My Water? once again. This time, with a brand-new chapter called Allie's Story.

In Allie's Story, The Big D introduces a third alligator (called Allie, natch) to the game, and adds 40 brand-new steam-filled stages to the hundreds of other watery, steamy, and icy levels that you've no doubt already tri-ducked.

Your aim in Allie's Story is to guide water (in one form or another) from one side of a level to the other in order to - unlike in previous chapters - power a musical organ.

Along the way, you can uncover and collect a variety of musical instruments. By doing so, you unlock further bonus levels. Yippee. 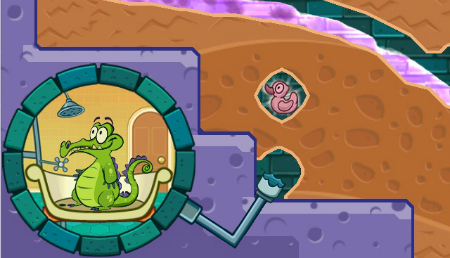 After downloading this new update, you'll also find a new "Weekly Rewind" pack in the Lost Levels section of Where's My Water?

In this section, Disney houses the most exciting and fun Swampy Levels of the Week stages.

Where's My Water? will set you back 69p / 99c from the App Store. Allie's Story is available as an in-app purchase for a further 69p / 99c.
SEE COMMENTS

Where's My Water? updated with 40 new musical levels for Allie the Alligator