By Peter Willington
| May 15, 2013
Other
|
Sega Mega Drive Arcade Ultimate Portable
Available on:

In this review of the Sega Mega Drive Arcade Ultimate Portable from AtGames, I could write the exact same thing. Because in a lot of ways this is an almost identical re-release of a re-release.

Sure, there's a new blue tint to the livery, and the games catalogue has been mixed up a little, but this is, for all intents and purposes, a very similar product.

It's not necessarily a bad thing that it's so similar, because Blaze's effort was pretty darn good.

What you're getting for your RRP of £39.99 is impressive value for money. This is almost a full Mega Drive system, with a screen and speakers, plus the equivalent of a six button controller, and 20 licensed games. And it fits right in your pocket.

For a lot of people, that will be a tempting proposition. Emulators on Android and jail broken iOS devices are all well and good, but nothing replaces the tactile feedback you get with a button. PSP and DS emulators can be okay, but they're far too much faff for a not-guaranteed return.

A system like this could appear to be just right for those looking for a little rosy tint to their portable gaming. Cheap, small enough, officially branded, and filled with a handful of top games. 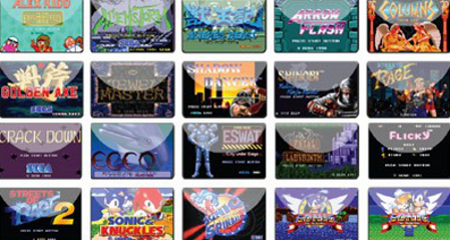 
Let's deal with those games first. Here's what you're getting;


A decent smattering then, but you'll notice some serious omissions there. No sports or driving games, for example. Two Streets of Rage titles, but no appearance of the third game. Sonic the first through to Knuckles, but no Sonic 3. Just the one Golden Axe, just the one Ecco, and no late-era classics like Vectorman or Comix Zone.

Also for a system that comes with 6 buttons, none of the games actually require their use. Which is odd.

Still for the type of person that simply wants to hear "wise fwom yor gwaves" on the commute to work while playing Altered Beast, that list is probably alright.

The biggest oversight is of course that it's also bereft of The Best Game Ever Made™, which as we all know is the seminal Gain Ground. It's a mainstay of this type of collection, but it's missing.

The games - not included

Of course Gain Ground doesn't have to be missing, and neither does Sonic 3 or Vectorman, or any other classic or not-so-classic games that take your fancy.

Because you can simply visit some shady parts of the web, download the ROMs, chuck them on a spare SD card, whack it in your Sega Mega Drive Arcade Ultimate Portable, and begin playing.

That's right, we're on that difficult subject of piracy again aren't we. It's a thorny issue, and you've no doubt already decided whether you're prepared to engage in this activity or not.

If you are, then the majority of games you attempt to run will play about as well as any of the ones that come packaged with the system.

It's a different story if you try booting up something a little more... exotic.

Take OutRun by way of example. It runs smooth enough, but the music seems much slower when compared to the original release. With Micro Machines the screen will roll constantly. Double Dragon just doesn't want to run.

I didn't see an obvious way to tweak the settings of the system either, so you can't easily compensate for any issues that come up. In the case of Super Street Fighter II The New Challengers though, this isn't too bad, as the game's "glitch" is that the load times are much faster. Awesome. 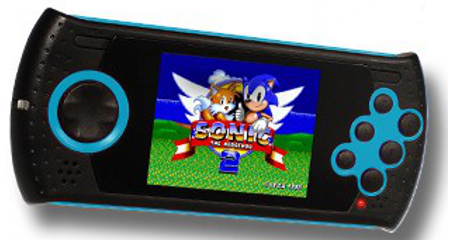 In control and looking good

I always disliked the original Mega Drive controller, and I didn't think much of the six button one either, but the Sega Mega Drive Arcade Ultimate Portable has no issues with its inputs. The D-pad has a nice bit of roll to it, making fighting games and platformers that little bit easier. The buttons ping back into place with a satisfying snap too.

The screen is no slouch either. It's backlit, it's sharp, and it's large enough for its purpose. You can see every filthy pixel the games are pushing out, and personally I'm a fan of that. If you're after the smudgy blur you'd get from coaxial cables, then you're out of luck. You pervert.

There's perhaps a paucity of colour depth, as some games I chucked onto an SD card had slightly off palettes, but it's barely noticeable to anything but purists, and it doesn't really affect the games that come pre-packed.

For the high quality of the rest of the build, and the goodwill made by the makers opening up the device to put whatever you want into its library, it's a gigantic disappointment in the audio department.

That low price point was perhaps always going to bite back somehow, and here it's in the system's capacity to blurt out sound. The main issue is that there's no low end to any of the audio, which is crucial to reliving the Mega Drive's glorious, warm bass-soaked soundscapes.

This renders soundtracks completely different, to the point that the die-hard, burned in your brain theme from the original Sonic The Hedgehog's Green Hill Zone is rendered almost unrecognisable.

It also manages to distort some bleeps and bloops until they sound as if they're being played through old Walkman headphones with the volume way up. There's no bass to anything, so thuds of drums and crunches of impacts have less wallop. Everything sounds so disjointed.

That's not what you want from this kind of purchase: a machine designed to invoke memories, as it promptly annihilates their audio component. Playing through a pair of headphones alleviates this a little, but not nearly enough.

You can't put a price on memories

So worth picking up? Yeah, probably. The perfect device for Mega Drive gaming? Not by a long shot.

If the audio had been upto snuff, or even a tolerable rendition of the original console's sound chip, then you'd be looking at a score you see below at least a couple of points higher, but its poor aural quality is almost unforgivable.

I say "almost" because, in every other aspect, this is a very sweet deal you're looking at. It's got a sterling screen, controls that are better than the original system's, and a very good - potentially incredible - games library. All for less than forty quid.

If you aren't an audio snob like me, then this is a bargain. If perfect emulation is crucial though, this isn't your handheld
By Peter Willington
| May 15, 2013 |
Other
Find out more about Sega Mega Drive Arcade Ultimate Portable
SEE COMMENTS